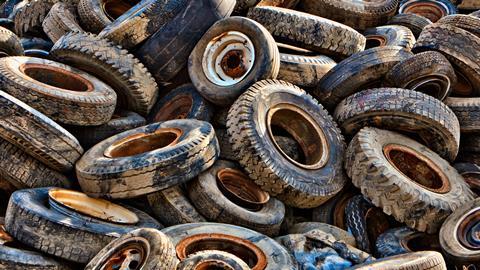 ‘The recovery of vulcanised rubbers is a major environmental problem, whose solution is still open,’ comments Carlos Scuracchio, who works on rubber recycling at the Federal University of São Carlos, Brazil. The high stability of vulcanised tyre rubber makes it challenging to recycle; toxic constituents may leach into the environment from used tyre stockpiles and fires at such locations can be dangerous, very polluting and difficult to arrest.

Michael Brook from McMaster University, who led the team behind the new silylation process has first-hand experience of tyre fires. ‘About 15 years or 20 years ago, not far from where I live in Hamilton, there was a really bad tyre fire. The byproducts of that were not good news for the local environment.’

Now, Brook’s team has shown that hydrosilanes, catalysed by B(C6F5)3, can effectively reduce sulfur–sulfur bonds in complex sulfur-crosslinked tyre rubbers in yields of up to 90%. They demonstrated their process on bicycle inner tubes, solid tyres and tyre crumb, and the resulting polymeric, silyl-protected thiolated oils were straightforward to separate by filtration or centrifugation. The team also showed they could radically or oxidatively crosslink the resulting oils to generate new elastomers, from which they created a new toy tyre as a proof of concept. 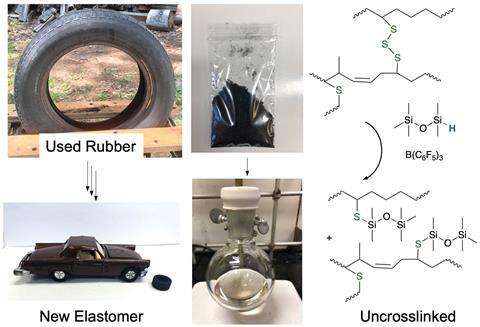 ‘We were surprised that you could actually get the rubber to dissolve and be converted back to liquid polymeric materials. I didn’t expect it to happen quite as well as it did,’ explains Brook. He says there is ‘really very little out there in the literature’ on the depolymerisation of sulfur-cured rubbers, and that ‘if there were a commercially viable process, people would be using it’. However, with 10wt% of ‘quite expensive’ catalyst being required to reduce the used tyre rubber, Brook clarifies that ‘there’s no way in my view that today this is a commercial process. But I think it opens the door into thinking about different ways to degrade the rubbers to make useful polymers again.’ The team are already optimising the process to reduce the quantity of catalyst it requires.

‘Most rubber recycling techniques generate materials that are difficult to mould and process and have quite different properties from the original raw materials,’ adds Scuracchio. ‘At this point, a very interesting part of the work is that the rubber can be processed without worrying about possible contamination, and the material produced is a rheologically simple oil capable of being moulded and transformed back into a solid product. This factor makes the method very promising in the field of rubber recycling.’