Chemists in the US have developed a new catalyst that could help in a key reaction used to generate hydrogen for fuel cells.

The so-called water-gas shift (WGS) reaction is often used in industry to help purify the hydrogen that is generated as a by-product in the reforming of natural gas. In the reaction, residual carbon monoxide in the hydrogen is combined with steam in the presence of a catalyst to produce hydrogen and carbon dioxide. The process purifies the hydrogen gas to a level where it can be used in fuel cells.

However, none of the catalysts currently used in the WGS reaction are ideal. Copper-based catalysts essentially do the job, but copper can spontaneously ignite in air - a dangerous property given that air is often used in fuel-cell operation. One touted alternative has been platinum, yet on its own this element is prohibitively expensive. To stand any chance of commercial viability it must be prepared in tiny particles supported by the rare-earth oxide ceria. 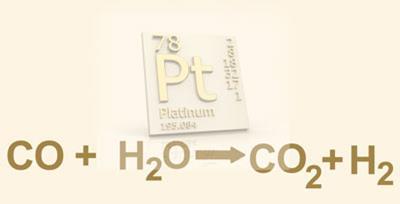 Unfortunately, ceria is only found in a few places around the world - places, according to Manos Mavrikakis of the University of Madison, Wisconsin, that may become restricted for geopolitical reasons.

It is with this in mind that Mavrikakis, together with Maria Flytzani-Stephanopoulos and colleagues of Tufts University and Harvard University, Massachusetts, have been investigating other ways to make platinum viable as a WGS reaction catalyst. By chance, they discovered that alkali metal ions like sodium or potassium can activate fine platinum particles when they are adsorbed on alumina or silica. When they examined the structure, they found extra active oxygen species that seemed to help the   platinum complete the reaction cycle.

Indeed, the researchers found that this type of catalyst works just as well in the WGS reaction as platinum on ceria, even at relatively low temperatures of 100?C. Yet they are not exactly sure how it works, because there is no experimental way to ’watch’ the atoms in action.

’Clearly more work is needed to demonstrate the long-term stability of these catalysts, so it is too early to say whether this study will be a crucial step in the adoption of fuel cells,’ says Frederic Meunier of the French National Centre for Scientific Research, France. ’Nonetheless, this is a major step forward in the understanding of platinum catalysis for the WGS reaction and will surely be a stepping-stone to new and more efficient catalytic formulations - in particular with a view at reducing the quantity of platinum needed to obtain an active catalyst.’