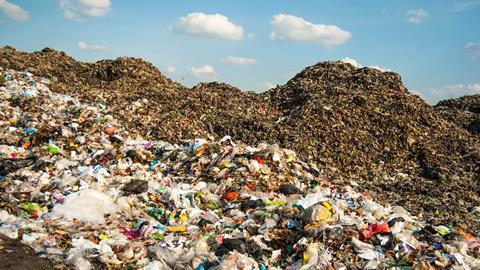 Plastic waste can now be efficiently converted into methane using a ruthenium-based catalyst. The patented technology could help mitigate the planet’s growing plastic waste problem while producing methane for use as a fuel or chemical feedstock in a more environmentally friendly way than fracking.

Recovering chemicals and fuel from plastic waste streams is nothing new. Processes including pyrolysis and gasification, which break down plastics using high temperatures and catalytic processes, can recover useful materials. However, these approaches create several products, including waste, and require additional processing and purification.

Another process called hydrocracking, which is often used in refining oil to make jet fuel and diesel, can convert plastic too. This reacts a feedstock with hydrogen and a catalyst at much lower temperatures and produces less waste. However, using the approach with plastic has been hampered by a lack of efficient and selective catalysts that can outperform thermal methods.

Now, Paul Dyson and colleagues at the Swiss Federal Institute of Technology in Lausanne (EPFL), have shown that hydrocracking with a ruthenium modified zeolite catalyst efficiently and selectively transforms polyethylene, polypropylene and polystyrene into methane that could be directly fed into natural gas networks. The team have since created an EPFL spin-off company called Plastogaz to scale up the technology.

‘What was really impressive about our work is the unprecedented methane selectivity that we have not seen described anywhere else,’ says study co-author Felix Bobbink who is now chief executive of Plastogaz. ‘The goal of our research is to give value to plastics that are considered waste, notably the plastics that cannot easily be recycled.’

Bobbink says the initial idea came when working on indirect carbon dioxide methanation. The team observed that all carbon atoms in a cyclic carbonate were converted into methane, with the oxygens combining with hydrogen to produce water. ‘As carbonates are a motif in plastics (polycarbonates), we decided to work with polycarbonates and polyesters, and later with polyolefins,’ Bobbink explains. 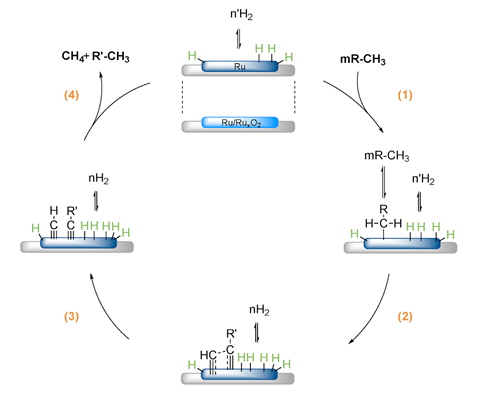 In search of an efficient catalyst, the researchers looked to ruthenium for its known efficiency in hydrocracking processes. First, they made several catalysts by loading varying amounts of ruthenium nanoparticles on zeolite supports. These were then tested by hydrocracking the liquid alkane hydrocarbon, n-dodecane, to arrive at the best catalyst relative to cost, dubbed RuZ.

Further recycling experiments with RuZ revealed it could efficiently convert polyethylene, polypropylene and polystyrene into methane in yields of 97%, 95% and 92% respectively after four hours. When plastics were converted together, simulating mixed plastic waste, the methane yield reached 99%.

‘The work demonstrates the chemical recovery of polyolefins with a very high selectivity to methane production, providing an efficient way for limiting by-products from the complex processes of polyolefin decomposition,’ comments Xiangyu Jie, who investigates heterogeneous catalysis at the University of Oxford, UK. ‘But with a process that uses large amounts of hydrogen and an expensive ruthenium catalyst to produce low-value methane it may be difficult to recoup the costs of recovery and separation.’

Bobbink explains that there is ‘no simple yes/no answer to whether the process is economically viable’. ‘We are currently studying an integrated process wherein the process is coupled to existing industrial systems to decrease cost associated to heat, logistic of feedstock, seasonal variations, and more.’