A production line for uniform lipid-coated microspheres has been created by Japanese scientists. Using a microfluidic device, the team can continuously generate fluid-filled vesicles that are all the same size and all have a single lipid bilayer surrounding them, and could one day be used in drug delivery or artificial cells.

Whilst lipid vesicles are used widely, problems with current production methods mean it is difficult to ensure they are all uniform in size and there is just one lipid bilayer surrounding each vesicle. Another tricky issue is developing an efficient encapsulation process, making sure the vesicle contents aren’t lost during synthesis.

Shoji Takeuchi and colleagues at the University of Tokyo claim to be the first to have devised a route that overcomes all three of these hurdles. ’These features have not been accomplished simultaneously with the other routes,’ says Takeuchi.

The team’s high-throughout production method uses a microfluidic device consisting of a main channel lined with small chambers. To prepare the device, it is first filled with an aqueous solution containing the material that will make up the vesicles’ contents. Oil is then flowed through the device’s main channel. This washes the aqueous solution out of the channel, trapping the water in the chambers where a monolayer forms at the interface of the oil and water. The aqueous solution then re-enters the main channel, replacing the oil and pushing some of it down into the top of each of the chambers. A layer of lipid forms here, squashed between the two aqueous layers, with a monolayer at both the ’water’-oil interfaces.

Next, a continuous stream of another aqueous solution is pushed through the main channel, and a gentle flow of the original aqueous solution allowed to enter from bottom of each of the chambers. The flow across the chamber entrance combined with the gentle flow upwards from bottom of the chamber causes the lipid layer to thin out, and the two monolayers to form one bilayer. The shear force combined with the upwards flow of aqueous solution means the lipid bilayer is pulled/pushed up into the fast flowing stream of aqueous solution in the device’s main channel. The shear force of the flow on the deformed bilayer eventually leads to a vesicle being pulled off from the leading edge of the bilayer. This process then continues, releasing ’perfectly’ sized and shaped vesicles at regular intervals (see image and video). 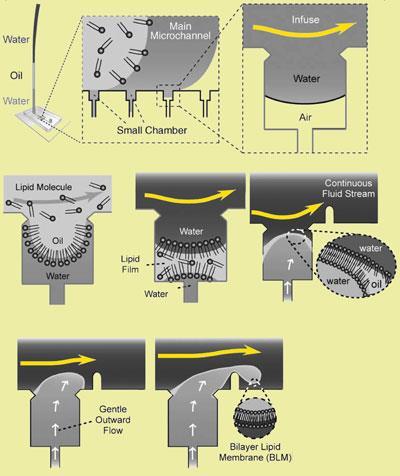 One bilayer produces 50 to 100 vesicles, and with multiple chambers in the main channel each device can produce thousands of vesicles at a rate of several hundred vesicles per minute. The device currently only works for a limited period (until the lipid bilayer runs out), but the researchers say that they should be able to scale up the process by making the lipid layer at the top of each chamber thick enough to make several thousand vesicles per chamber.

Jonathan Howse, an expert in making polymer vesicles at the University of Sheffield in the UK, is impressed by the work. ’It is like blowing bubbles underwater,’ he says, ’a bubble from a child’s toy is just a bubble of air, trapped by a liquid layer, in air, and this is a volume of water trapped inside a lipid layer in water. The lipid layer is analogous to the toy that you blow through.’ He particularly likes the fact that the aqueous solution that is encapsulated is separate from the medium flowing through the device at all times - giving the process high encapsulation efficiency.

Currently the device only produces vesicles of one size, approximately cell-sized. This makes it useful for artificial cell research, according to Takeuchi. The vesicles have a phospholipid membrane, analogous with living cells, and can be used to model the kinetic behaviour of living cells and for drug delivery applications. ’We now need to study how our immune system will respond to our vesicles,’ says Takeuchi. ’Since we use oil (hexadecane) to form the lipid bilayer and this oil remains inside the membrane, we need to know how this remaining oil affects [human bodies] compared to oil-free vesicles,’ he adds.