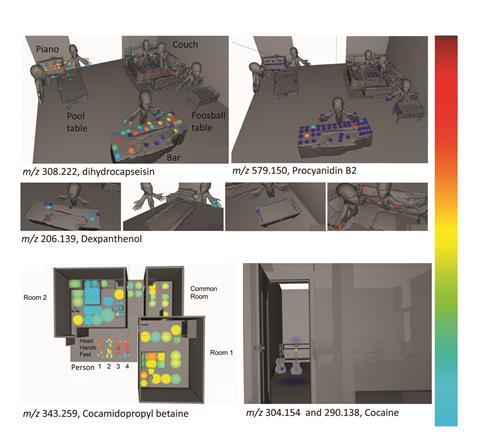 The researchers were able to create heat maps of levels of different chemicals (red highest; blue lowest) they found in rooms and on items

The idea that ‘every contact leaves a trace’ – known as Locard’s exchange principle – is a cornerstone of forensic science. Now, US researchers have mapped the traces of chemicals left by human contact in a variety of everyday environments, using mass spectrometry to identify thousands of different molecules.

Their findings highlight the enormous influence humans have on the chemistry of the environments we inhabit and interact with. The team found traces of food and drink, personal care products, detergents, biological molecules and even drugs in the areas that were studied, and made 3D maps to show the impact of humans on an area’s chemical makeup.

‘We spend 90% of our time indoors, yet we do not know the chemicals that are present. If one asks the question “[What are] the top 10 most abundant molecules in the human habitat?” no one can answer,’ says Pieter Dorrestein of the University of California, San Diego in the US, who led the research.

To try and get some answers, Dorrestein’s team swabbed surfaces and objects at six sites of interest: a two bedroom apartment, two bicycles, a car, a communal social area with a bar and a drinking water fountain. They also took samples from the clothing, faces, hands and feet of a handful of volunteers who were first allowed to ‘interact’ with those sites. All in all they collected thousands of samples that were then taken back to the lab and analysed using liquid chromatography and mass spectrometry.

The team built virtual 3D models of the sampled areas using mapping software, so that by knowing the precise coordinates where each sample was collected, they could map the spatial distribution of the different spectra using a technique called 3D molecular cartography. Information from mass spec reference libraries was used to identify as many of the chemicals as possible.

‘We learned that humans contribute a lot to the chemicals found in the human habitat – perhaps as much, if not more, than the building materials and indoor air,’ says Dorrestein. ‘The molecules seem to relate to human behaviour and this gives a picture of that in a spatial manner.’

Among the identifiable substances were molecules from tea, coffee and common foods such as chocolate – notably caffeine, catechin and theobromine – as well as common additives such as flavourings and artificial sweeteners like aspartame and sucralose. In the bar area, components of beer and wine were present, as well as dihydrocapsaicin, an analogue of the chilli molecule capsaicin found in food like curries and salsa that are served and eaten there. Dorrestein says he was surprised at how many of these food molecules were detected.

Most of the areas also contained chemicals from detergents and cleaning or personal care products. One of the most common was cocamidopropyl betaine, which is found in shampoo, body wash and toothpaste.

Traces of cocaine and some of its breakdown products was found on two of the objects surveyed – including an electric guitar within the apartment – but on none of the volunteers. As most of the cocaine had hydrolysed, it is thought to have persisted for many years, rather than indicating recent use.

As well as detecting and mapping the distributions of the various chemicals, the readings could be compared between physical locations and the human subjects who were known to have interacted with them. The researchers showed that often there was a high level of agreement between the chemical profiles of individuals and the spaces they occupied – for example, samples swabbed from the volunteer who owned the car were similar to those from the driver seat, but not the passenger side of the car. Likewise, there was a close match between the floor of the apartment and the soles of the shoes of its two inhabitants, but none of the other volunteers.

This raises the possibility of using this kind of information for forensic purposes, where a person’s chemical ‘fingerprint’ could be used to tell whether they had been in a particular place.

Glen Jackson, a forensic scientist at West Virginia University, US, is enthusiastic about this possibility. ‘The work has the potential to break down the silos of different disciplines by simply showing where different chemicals exist in our environment,’ he says. ‘Primary and secondary transfers are an important consideration in crime scene reconstruction, and work like this could be very valuable for investigators.’

‘It suggests that human signatures left on surfaces fade over time and that frequent touching of surfaces is required to transfer significant trace chemicals […] The next step is to learn how much of each type of chemical transfers during each touch, and how many touches, and what type of touch, does it take to reach a certain level of transfer.’