Chemistry gets strange at water’s surface 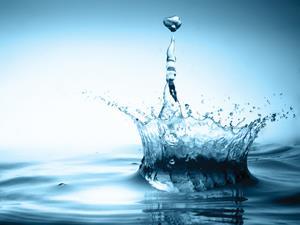 It seems like stating the obvious to say that oppositely charged ions attract each other and like charges repel. But a theoretical study suggests that, close to a water surface, little is intuitively obvious any more. The attraction of opposite charges may get even stronger near the interface, say Shekhar Garde and colleagues at Rensselaer Polytechnic Institute in the US, but the repulsion of like charges can weaken and even – if the ions are actually pulled above the water surface – turn into attraction.1

Since electrochemical and ionic processes at aqueous interfaces are relevant to fields ranging from catalysis to battery technology, the findings could prompt some widespread rethinking. Garde and colleagues have already found that the stability of proteins bearing charged groups could be significantly altered when they are close to a water surface.

At first it seems no surprise that interactions between ions will change close to an interface, the researchers say, because as the density of water declines it is less effective as a dielectric medium that screens the charges from one another’s electric field.

But if that was all there is to it, both the attraction of opposite charges and the repulsion of like charges should get stronger. In the simulations, this wasn’t the case – only the first of these increased.

When Garde and colleagues took a closer look, they found that the dominant factors contributing to the free energy of the ions differed in the two situations. The coming together of opposite charges at the interface was favoured by both enthalpy and entropy. Because some water molecules bound in the ions’ hydration shells are freed when the shells overlap, there is a gain in entropy as they associate. What’s more, because of an extra entropic driving force at the surface, the tendency of ions to pin and restrict spontaneous fluctuations of the water surface, known as capillary waves, is reduced when the ions come together.

But even for like charges there is an influence that can tend to bring the ions together: if they are bridged by water molecules in the hydration shells, this can be enthalpically favourable even though reduction of the freedom of the bridging molecules is entropically unfavourable. This water-bridging of like charges has been seen before in bulk solution,2 but the attraction is even stronger at an interface, where there is also the entropic bonus from capillary-wave effects.

If the ions are actually pulled out of the water into the gas phase, a finger of water can be drawn out from the interface along with them. When two such fingers cohere, the total surface area is reduced and the water molecules may bridge the ions. The resulting enthalpy gain may outweigh the electrostatic repulsion and create a net attraction.

The researchers have explored one particular consequence of the effect: how the stability of a folded peptide chain is altered at the interface if there are oppositely charged amino acid residues at each end. They simulated such a seven residue peptide, which adopted a helical conformation in bulk solution, and found that, thanks to the greater attraction between its ends at the water surface, it changed to a hairpin conformation.

‘Many globular proteins are known to go to interfaces and unfold, aggregate, forming a film,’ says Garde. This is largely because the hydrophobic forces that help to keep them folded are weaker at the interface – something Garde and others have explored previously.3 But it might be possible to exploit the enhanced ‘stickiness’ of ions to make proteins more stable at a surface, or even to design ones that specifically fold and become active there. ‘Fibril formation of amyloids at interfaces may be another example where altered hydrophobic and sticky electrostatic interactions may be playing a role,’ says Garde.

‘This is a really nice piece of work,’ says Pavel Jungwirth of the Czech Academy of Sciences. ‘The enhanced pairing of like-charging is certainly a counter-intuitive effect.’ But he cautions that the claims still await experimental verification.