Chemistry on the front line 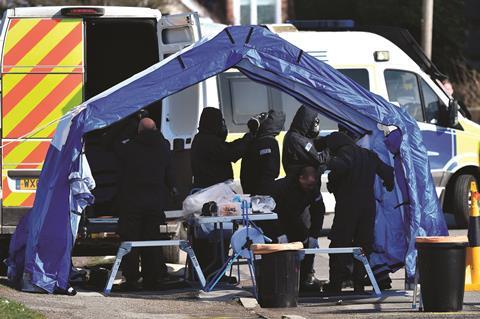 Chemistry has once again made the front pages of all the newspapers. But for all the wrong reasons. This time it’s the poisoning of a former Russian military officer turned spy for the UK and his daughter with an exotic nerve agent in the sleepy city of Salisbury.

Passions are running high, and bilateral relations are in trouble. A heinous weapon of war – illegal under international law – has been used in the UK, leaving two people critically ill. It has also injured emergency workers who attended to the victims. The UK government and the EU now agree that it is ‘highly likely’ that the Russian state was behind the poisoning.

The British authorities have announced that chemists at the Defence Science and Technology Laboratory identified the nerve agent as a member of a class known as ‘Novichoks’ that the Soviet Union developed in the 1970s. (Spare a thought for these chemists who must have been working around the clock, non-stop and under intense pressure to identify the mystery poison.)

It should come as little surprise that things are pretty murky in these kinds of incidents. The Novichok programme was never formally acknowledged by authorities in the Soviet Union or Russia. What is publicly known about it mostly comes from two former Russian chemists who worked on the secret programme and turned whistleblowers in the 1990s. The UK authorities are playing their cards close to their chest, as they continue to investigate. That’s understandable, but such conditions can also allow conspiracy theories to flourish, so transparency matters.

The arrival of experts from the Organisation for the Prohibition of Chemicals Weapons – guardians of the Chemical Weapons Convention – will help. Their independent investigation will complement the UK’s work and help shed more light on the poisoning. And further chemical forensics can reveal what happened where and, perhaps, even where this nerve agent was made. The government should now give serious thought to an inquiry into the poisoning. It took almost a decade for a full-scale investigation into the poisoning of Russian dissident Alexander Litvinenko with polonium-210 in London. Another such long wait would be unthinkable.

The public has been scared by the events in Salisbury. They need reassurance and answers. Investigation and information can help to allay these fears. Chemistry may have helped develop these terrible weapons, but chemistry can ensure that the truth comes out.