Chemists put finger on the trigger to attack cancer

Hydrogen peroxide-triggered release mechanisms could help reduce the side effects of cancer drugs by keeping them safely locked up until they reach the oxidising environment of cancer cells, say scientists in the US. The idea could make highly toxic chemotherapy drugs like nitrogen mustards more selective and, therefore, more useful.

Cancer chemotherapies like cisplatin and nitrogen mustards, which crosslink DNA to prevent it replicating, are commonly used to treat tumours. Unfortunately, they have very little selectivity for cancer cells over normal cells, so tend to have unpleasant side effects. Xiaohua Peng at the University of Wisconsin in Milwaukee and her team wanted to exploit the fact that cancer cells often contain high concentrations of reactive oxygen species like hydrogen peroxide. This could provide a trigger to selectively activate these drugs and hence reduce their toxicity.

The team’s strategy needed two elements. First, the drug must be deactivated to stop it attacking DNA in healthy cells. Peng explains that for nitrogen mustards this is relatively simple. The lone pair of electrons on the central nitrogen atom is essential for DNA alkylation, so forming a quaternary ammonium salt effectively kills the reactivity. 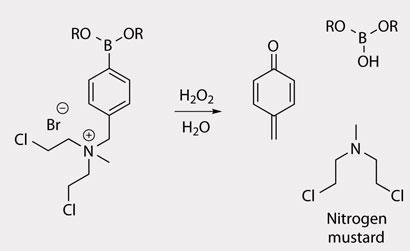 The second element is a mechanism for releasing the drug. ’Boronates have been used to make fluorescent probes for detecting hydrogen peroxide and various studies have shown they are non-toxic,’ says Peng, making them ideal trigger molecules. The team’s prodrug molecules have the boronate trigger and deactivated nitrogen mustard group attached to opposite carbons of a benzene ring. When the boronate is attacked by hydrogen peroxide, the molecule fragments and releases the activated nitrogen mustard drug. Tests on cell lines showed that the molecules could selectively kill tumour cells without damaging normal ones.

’This is a neat application of H2O2-selective boronate switch chemistry,’ says Bob Croy from the Massachusetts Institute of Technology in Cambridge, US. ’Key issues that will determine their effectiveness as antitumor agents in vivo will be the concentration of H2O2 required for activation and whether macrophages and other cells that use H2O2 as a weapon against infections are also targeted,’ he adds.

The group are now working to increase the potency of their molecules and find ways of incorporating other known chemotherapy agents. Peng explains that for cisplatin, the challenge is to find a way of deactivating the drug in a way that it can be reactivated by the boronate trigger. ’We have to find a way to mask the toxicity,’ she says.