Chemists taken aback as dinitrogen found to speed up some reactions 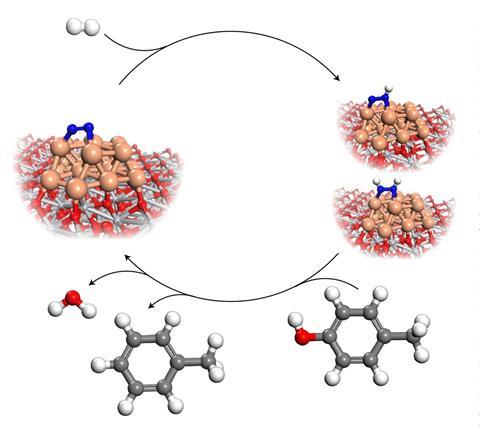 Molecular nitrogen has been found to actually speed up some reactions that use ruthenium-based catalysts – despite being considered inert for the purposes of most chemical reactions.1 This behaviour could also affect other catalytic processes, so dinitrogen should no longer be considered as a simple inert carrier gas, the team from the UK and China say.

Heterogeneous catalytic reactions usually consist of two or three phases, including a solid-phase catalyst, as well as gas- and/or liquid-phase reactants and solvents. Most studies focus on improving the catalysts, but as these processes occur at interfacial sites, species from the other two phases can also affect the catalytic properties. Dinitrogen is commonly used as carrier or protective gas in catalytic reactions because it is considered to be unreactive. But now chemists have discovered that the molecule can sometimes behave in unexpected ways.

Dermot O’Hare of the University of Oxford and colleagues investigated the hydrodeoxygenation of p-cresol to toluene over a titanium oxide supported ruthenium catalyst and found that introducing 6 bar dinitrogen caused a 4.3-fold activity increase at 160°C under batch conditions. ‘The greatest impact of this work is to demonstrate that a hitherto perceived unreactive molecule can now be observed to increase catalytic performance,’ O’Hare says. ‘This is extremely surprising and unusual.’

The researchers carried out experiments at different temperatures and using various ruthenium catalysts. Their results showed an enhancement on all the studied materials. DFT calculations helped them understand the mechanism involved. ‘We think the nitrogen molecule may convert to a more reactive NNH species on the metal surface,’ O’Hare says. Jun Li at Tsinghua University, who also participated in the study, explains that this NNH pathway for dinitrogen activation, which he says mimics the biological pathway used by nitrogen-fixing bacteria, has been theoretically proposed for ammonia synthesis2 but had not been confirmed experimentally until now. ‘This work provides the first experimental evidence of the unusual formation of NNH or NNHx species,’ he says.

‘Normally, nitrogen is considered extremely inert, which makes this proposal quite exciting, as such behaviour is unprecedented,’ says Michael Fryzuk of the University of British Columbia, Canada, who was not involved in the study. ‘The role as a catalytic promoter facilitating protonation of surface-adsorbed hydroxyl species is quite enticing, but as the authors are careful to note, the role of nitrogen may also be to open up more sites on the ruthenium surface by removal of surface hydrogen atoms.’

O’Hare thinks the new results could have a wider impact. ‘This may be a more general concept and applicable for other metal-based catalyses,’ he says. ‘Researchers should now add nitrogen to their gas streams to see what happens.’ Fryzuk agrees that this would be an interesting thing to do. ‘There may be some surprises that await,’ he adds. Li believes that the NNH pathway could become a useful strategy for ammonia production. ‘On the theoretical side, we plan to explore a wide range of metals to determine which metal surface can facilitate this pathway the best. Then it might be used for nitrogen-to-ammonia conversion,’ he says.