The annual loss of around one per cent of the world's permafrost areas could trigger the release of even more greenhouse gases.

The annual loss of around one per cent of the world’s permafrost areas will trigger the release of more greenhouse gases, starting a vicious circle that could make global warming even worse than anticipated, scientists have warned. 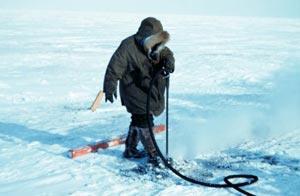 Peter Kershaw from the University of Alberta at Edmonton, Canada warned an audience of over 500 people at the Royal Geographical Society, London on Thursday that ’due to global warming, permafrost in the Arctic is degrading.’ Kershaw has been monitoring the effects of climate change on Arctic biotopes for many years, supported by volunteers who can join his research via the Earthwatch Institute.

Kershaw’s research on locations in Canada - at Churchill and in the Mackenzie Mountains - has shown that permafrost areas are receding rapidly, and if current trends continue they will disappear completely within decades. These vast frozen areas on all continents surrounding the North Pole harbour over 400 gigatons of organic carbon locked in frozen peatland. Kershaw thinks that the release of methane and carbon dioxide from these peatlands will act as a positive feedback loop that could make global warming even worse than previously thought. ’The permafrost component of global warming has been underappreciated,’ he told Chemistry World.

’Peter Kershaw’s research shows how global warming is beginning to unravel the earth’s natural systems for storing carbon,’ said Roger Mitchell, chief scientist at Earthwatch Europe. ’If this system is further disrupted there will be huge consequences for the entire planet.’

Kershaw has observed that both wildlife and human communities in northern latitudes are already beginning to suffer from climate change.

Consequently, Mitchell said, ’we must not only continue to pursue economic and technological solutions to mitigate these effects, but also put strategies in place to adapt as our local climate changes and the climate envelopes for our crops and wildlife move.’
Michael Gross