Chloride ions in a bind

Chemists in the US have designed a donut-shaped molecule that tightly binds negatively-charged chloride ions.

Anion binding is crucial in many biochemical reactions, so the ability to selectively pull particular anions out of solution offers scientists a way to control these processes. 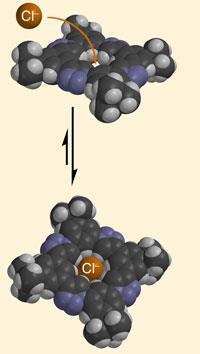 A chloride ion fits snugly within the receptor’s cavity

The new binding molecule allows a chloride anion to fit snugly into its central cavity, holding it in place with surprising strength by eight C-H hydrogen bonds - which are normally thought of as weak hydrogen bond donors.

Amar Flood and Yongjun Li at Indiana University in Bloomington clipped together their anion receptor in a few short steps using click chemistry, a protocol that relies on fast, high-yielding reactions. The resulting structure has eight C-H bonds pointing directly into the central cavity, which all contribute to the receptor’s overall affinity for chloride ions.

’All the previous anion binders that we compare our receptor with use N-H bonds - traditionally thought of as strong hydrogen bond donors - or they have a net positive charge,’ Flood told Chemistry World. ’In the design phase, we in no way thought our binding affinities would rival these in strength - it’s quite remarkable that they do.’

Four of the key C-H bonds are located within triazole structures, which form when azide and alkyne precursors ’click’ together as the cyclic molecule is made. Flood suggests the three nitrogen atoms that form part of the triazole group may be withdrawing electron density from the C-H bond that points into the cavity, improving its hydrogen bonding potential.

’This is a completely new way to make anion binders, and click chemistry is very versatile, so this approach could give rise to whole new libraries of anion receptors,’ Phil Gale, who studies anion binding at University of Southampton, UK, told Chemistry World.

Flood said he already has plans to make rings of different sizes. ’There’s extreme modularity to this synthetic approach, so we’re looking to expand the cavity size to bind larger anions like phosphates, and even to radioactive pertechnetate ions [TcO4-] from nuclear waste - although that’s is a tetrahedral anion and might require a different receptor design.’

’I think it’s time we turned more attention on C-H hydrogen bonds,’ added Flood. ’Perhaps they are not the innocent bystanders we once thought.’