The US and UK lay out plans to combat climate change

UK Prime Minister Gordon Brown has set out a ’Roadmap to Copenhagen’ in advance of the climate change conference being held in the Danish capital in December. Global emissions must be cut by at least half by 2050 compared to 1990 levels, he said, but developed countries must agree to cut their own emissions by 80 per cent so developing countries can continue to grow. Industrial countries will have to provide cash to ensure climate mitigation is able to happen in the developing world, and Brown suggested that they should provide about $100 billion (?60 billion) a year by 2020.

’It’s not clear who is going to put up that money; it’s obviously going to be difficult for all the economies that are struggling with the recession to come up with big numbers like that,’ says Paul Ekins, professor of energy and environment policy at Kings College London. ’The EU has said it’s going to put its contribution on the table in September or October, and I think we’re going to have to wait for that, and how it’s broken down by country.’

However, Jean-Pascal Ypersele, vice chair of the Intergovernmental Panel on Climate Change (IPCC) suggested at a recent European Commission conference on climate change that the figures being used by policy makers are out of date and even more stringent measures will need to be taken. ’To remain between 2?C and 2.4?C above pre-industrial levels [that is, warmer than the 2?C cut-off being used by policymakers], you basically have to have zero emissions globally before the end of the century, somewhere around 2070,’ said van Ypersele. ’The earth is heading towards a climate that no human has ever known.’ 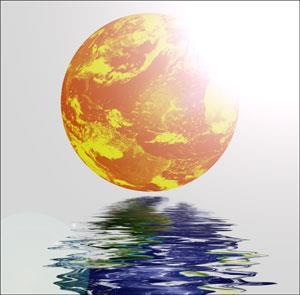 Fear of a hot planet

In the US, the Clean Energy and Security Act has made it through the House of Representatives, albeit by a narrow margin. Its aim is to reduce 2005 greenhouse gas emission levels by 17 per cent by 2020, and it includes an emissions trading scheme where about 8 per cent of carbon permits will go to energy companies and heavy industry. The bill also proposes investment in new clean energy technology, and will require electricity companies to generate 20 per cent of their demand from renewable energy sources by 2020. The next step for the bill is the Senate, where another tough battle is expected.

Meanwhile, the Royal Society claims the UK’s energy system will be unable to meet future needs while also preventing rapid climate change. In a new report, ’Towards a low carbon future’, it calls for a new vision for energy generation, based on new technologies.

’For the sake of future generations, we cannot afford to wait until our climate is changed dramatically or the oil runs out before we end our dependency on fossil fuels,’ says the report’s lead author, John Shepherd, of the University of Southampton’s National Oceanography Centre. ’If the UK wants to provide global leadership, it has to convert talk into action. The world needs new ways to generate our electricity, and the rate of progress has been disappointing.’

The report sets out a roadmap of technologies that will be helpful in the short, medium and long-term. These range from renewables and carbon capture and storage in the short term, through to advanced energy storage to allow widespread use of intermittent energy such as wave and windpower in the long term.