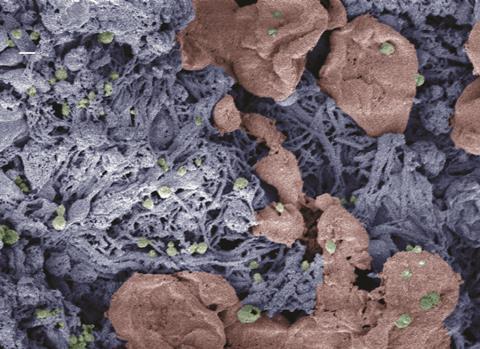 Nanoparticles shown to control internal bleeding have been developed by a research team at the University of Maryland, Baltimore County (UMBC). They hope that this technology will one day be used to prevent fatal haemorrhaging. The work was presented at the American Chemical Society’s meeting in Philadelphia, Pennsylvania.

‘We were really shocked, actually, to find out that there really weren’t any products to control internal bleeding, and that’s what motivated this work,’ said polymer engineer Erin Lavik, who led the research. She and colleagues created these nanoparticles out of poly(lacticco-glycolic acid) – the same material dissolvable sutures are made from. The nanoparticles are functionalised with polyethylene glycol.

When the body is injured platelets gather at the site to help repair the damage. The UMBC nanoparticles act as a bridge, binding the activated platelets to aid the blood clotting process. ‘They augment the interaction and help to further make bridges and actually cause the clotting to happen faster,’ Lavik states. ‘We are relying on the biology for specificity.’

She and colleagues have performed numerous animal studies on several different injury models, and so far their nanoparticles do appear to facilitate faster clotting at entry site. In one rodent model the nanoparticles halved bleeding time. The team also looked at animal models of blast injuries – most commonly sustained by military personnel –and found that the nanoparticles reduced haemorrhaging in the lungs, and improved survival rates.

One concern is what happens when the wound is healed. The UMBC team found that the nanoparticles remain in the clot for its lifetime and then degrade as the clot breaks down. ‘They clear out of the bloodstream if they are in circulation, but it is a very different thing once they are actually bound into the injury site,’ Lavik explains. Another worry that seems to be without merit is that these nanoparticles could lead to dangerous non-specific clotting. ‘These particles are ridiculously simple, so they really don’t target anything – they are just flowing through the blood stream,’ Lavik says. They get cleared very quickly, since their half-life in the blood stream is only a couple of minutes, she adds.

One significant question is whether these nanoparticles will be effective or safe for people who take anticoagulants. More research is needed to reach an answer, but Lavik is optimistic. ‘I think there is a good possibility they will be, at least with some of the anticoagulants,’ she tells Chemistry World.

But there are many anticoagulants, and they have different mechanisms of action. Lavik’s research has shown that one anticoagulant in particular blocks the receptor that her nanoparticles target. ‘That has a dramatic impact on the particles,’ she says, pointing out that many of the other anticoagulants affect different components of the coagulation cascade. ‘In those cases there is a good chance that these particles will still be helpful, but we have to look at the dose–response and see exactly what that is,’ Lavik says.

It remains to be seen whether these nanoparticles can be used to treat clotting disorders, rather than just injuries, but Lavik is sceptical. ‘I don’t think I would use it as a preventative,’ she warns. ‘Technically, you should be able to engineer it to be something that’s long-circulating, but I just am not sure that is the wisest thing – I don’t know that I personally would want nanoparticles floating through me if I didn’t need them.’