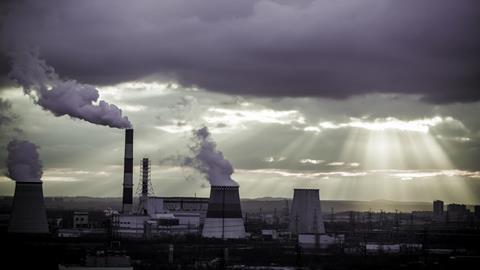 Burning fossil fuels, volcanic eruptions and soil bacteria release oxides of sulfur and nitrogen into the air. High in the atmosphere, these oxides transform into sulfuric acid and nitric acid – which falls as acid rain.

Sulfuric acid, in particular, forms when sulfur trioxide reacts with atmospheric water. During the reaction, hydrogen bonds organise sulfur trioxide and water into a stable supramolecular complex called an adduct, which facilitates an unusual nucleophilic attack by water. However, the precise mechanism behind this nucleophilic behaviour has long been unclear.

Tomás Rocha-Rinza and his team at the National Autonomous University of Mexico used state-of-the-art quantum mechanical calculations to investigate this peculiar mechanism, by simulating the reaction and mapping changes in electron density. ‘We noticed that the catalytic production of acid rain could be understood from the mutual strengthening of two hydrogen bonds,’ Rocha-Rinza says.

These hydrogen bonds form between sulfur trioxide and water, and they hold the adduct together. Electron density transfers onto the oxygen atom of the attacking water, making it more nucleophilic. Likewise, the sulfur atom of sulfur trioxide loses electron density, making it more electrophilic. These changes lower the energy barrier for nucleophilic attack, which diminishes even further when more water molecules join the adduct and form a cluster. ‘Later, we realised that this explanation was very similar to the mechanism of action of bifunctional catalysts in modern organic chemistry,’ Rocha-Rinza continues. In organic bifunctional catalysis, hydrogen bond cooperativity alleviates the energetic cost of a reaction between a Lewis acid and a Lewis base.

Matthias Bickelhaupt, a theoretical chemist at VU University of Amsterdam in the Netherlands says the importance of Rocha-Rinza’s study reaches far beyond this particular reaction: ‘They used a clever approach based on micro-solvation, to answer why these effects occur in water droplets. In this way, they have achieved a much deeper insight that will help gain a more general understanding of the observed and computed phenomenon.’