Researchers have developed a lead- and palladium-free alternative for the Lindlar catalyst. The cobalt-based heterogeneous catalyst proved to be efficient for catalysing the semi-hydrogenation of alkynes and exhibits high selectivity, mitigating some of the problems encountered when using the traditional Lindlar catalyst.

‘The Lindlar catalyst is a special catalyst which allows the selective hydrogenation of alkynes to alkenes. This is an important reaction step for the synthesis of vitamins, especially vitamin E,’ says Kathrin Junge from the Leibniz Institute for Catalysis in Germany. However, the catalyst is far from perfect as it typically consists of 5wt% palladium supported on CaCO3, along with 1–5wt% lead and quinoline. Lead obviously creates toxicity issues, but the catalyst also suffers in terms of performance and can lead to over-hydrogenation and isomerisation. Researchers have successfully addressed its performance issues by replacing lead with other precious metals, such as ruthenium or gold. However, alternatives using non-noble metals have had limited success. 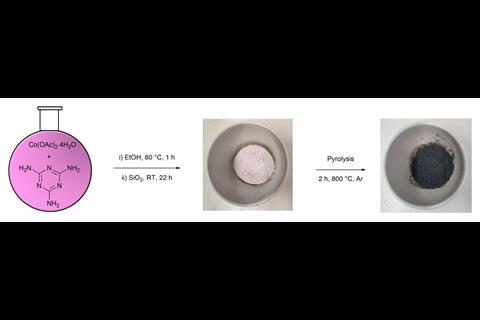 To make the catalyst, a nitrogen doped carbon layer is created around the metal nanoparticles to regulate their behaviour and prevent over-hydrogenation, thereby removing the need for toxic lead 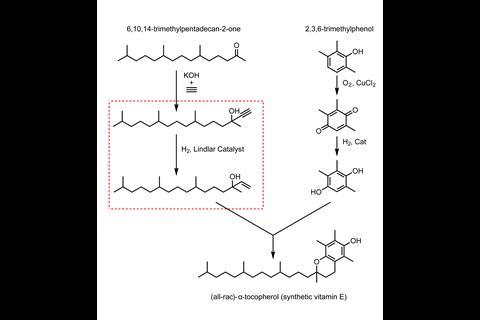 Now, researchers in Leibniz, led by Junge and Matthias Beller, have partnered with researchers at DSM Nutritional Products in Switzerland to develop a catalyst with improved activity and recyclability. The new catalyst they have created is based on cobalt nanoparticles modified by nitrogen doped carbon and supported on silica. ‘This new material can be applied as an alternative to the traditional Lindlar catalyst and promote the semi-hydrogenation of a range of vitamin precursors as well as other functionalised alkynes with good yields and selectivities,’ explains Junge.

Antonio Leyva-Pérez, an expert in catalysis at UPV–CSIC in Spain says the work demonstrates ‘that catalysts based on cheap available materials, ie cobalt, melamine and silica, provide a feasible pathway for the synthesis of these industrial intermediates’. ‘Although a plethora of alternatives for the Lindlar catalyst have been reported, this new solid catalyst based on earth-abundant materials is of particular interest,’ he adds. Indeed, the catalyst exhibits high selectivity and can perform selective hydrogenations of C–C triple bond even in the presence of susceptible functional groups, such as a nitro group, thus broadening its versatility in organic synthesis.