Chemical reactions at extremely low temperatures, for instance in interstellar clouds, can run at surprisingly fast rates, report astrochemists who have used a combination of theoretical and experimental methods to work out why. 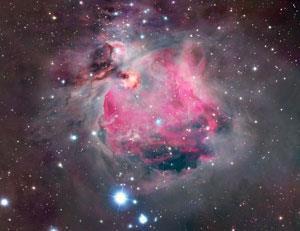 Researchers have spotted more than 100 different molecular species in interstellar clouds. Attempts to mimic the conditions under which these molecules form have led to the observation that certain reactions occur surprisingly fast at outer space temperatures. Combining theoretical predictions with experimental observations, they have arrived at plausible explanations for this apparent paradox.1

In a theoretical paper, Ian Smith and colleagues at the University of Birmingham, UK, proposed several mechanisms by which neutral species reacting under the near-vacuum pressure and extremely low temperature conditions of interstellar clouds could defy Arrhenius’ law and actually react more rapidly at lower temperatures.2 Now Smith has joined forces with Ian Sims’ team at the University of Rennes in France and with theoretical chemists in the US, to test these predictions experimentally and to work out what really makes reactions go faster in the cold.

The researchers measured the rates of reaction of oxygen atoms in their electronic ground state with a range of different alkenes at temperatures down to 20 K (?253 degrees Celsius). They found that, in most cases, the ionization energy of the alkene and the electron affinity of the oxygen atom allowed them to predict the kinetics of reactions at low temperatures.

The predictions rely on the difference between ionization energy of the alkene and the electron affinity of the oxygen atom, which corresponds to the barrier for a virtual electron transfer between the reactants. If this parameter is smaller than 8.75 eV, the researchers report, the reactions are likely to proceed relatively fast at 20K, which could be relevant to the chemistry of interstellar clouds.

Arrhenius’ law doesn’t apply here, said Smith, because ’there is no well-defined barrier on the minimum energy path leading from reactants to products in these reactions.’

Franco Gianturco, professor of theoretical chemical physics at the University of Rome, Italy, praised the timeliness of the work: ’The results and their interpretation are particularly remarkable because they appear during a notable increase of interest in "ultra cold chemistry", triggered by the studies of chemical processes in magneto-optical traps where Bose-Einstein condensates of atoms have already been studied for the last ten years or so,’ he said.

’Only calculations had so far suggested that chemical reactions with small or no barriers could occur in ultra cold traps with very large rates,’ Gianturco told Chemistry World. These latest experiments ’open up a new vista on chemical reactions under operating conditions which we had always thought to be hostile to chemistry,’ he concluded.

Although a detailed understanding of the chemistry going on ’out there’ is still a long way off, Sims and Smith are confident that their prediction method ’should provide guidance at the order-of-magnitude level’. This is valuable given the scarcity of detailed information on interstellar clouds, they said.

Eric Herbst, an astrophysicist at Ohio State University, US, agreed: ’This work will lead to a significantly better general understanding of which neutral-neutral reactions are important in cold interstellar clouds.[The researchers] have provided an inestimable service to the astrochemical community,’ said Herbst.