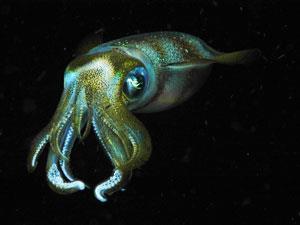 Cuttlefishes' camouflage skills have many admirers

Inspired by the camouflage abilities of marine organisms, such as the cuttlefish, US researchers have created striped ellipsoid particles using controlled self-assembly of diblock copolymers. By swelling and rotating the particles their colour can be changed, which could lead to a variety of optical applications including computer displays and better camouflage.

Cuttlefish blend into their environment because their skin has cells containing striped structures. These structures have a layer of pigmented sacs called chromatophores and a layer of reflecting plates called iridophores. By contracting and relaxing muscles attached to chromatophores they can control the amount of pigment revealed and the degree of reflection. This is similar to the way in which Bragg reflectors work, and they are made from multiple layers of alternating materials with varying refractive indices, and commonly used as waveguides in optical fibres.

Finding ways to mimic this optical trickery has received a lot of attention in recent years. A team at the University of Bristol, UK, recently created artificial muscles and chromatophores using elastic polymers that respond to an electrical stimulus. Another team at the Massachusetts Institute of Technology, US, is developing a cuttlefish-inspired display using an electrical system to control the spacing between layers of polystyrene and poly(2-vinylpyridine).

Now, Craig Hawker and colleagues at the University of California, Santa Barbara, have come up with a synthetic version of the colour-changing structures in cuttlefish cells. They created self-assembling ellipsoid particles that act like Bragg reflectors using poly(styrene-b-2-vinylpyridine) diblock copolymers and surfactant coated gold nanoparticles.

'A Bragg reflector does not involve pigments or dyes – it is a physical system and so it is much more stable,' says Hawker. '[This work] could lead to a wide variety of optical applications where colour change is desired including active camouflage and display screens. Low power portable devices could also have displays based on these systems such as electronic paper or e-ink technology.'

They have achieved some very basic colour changes to date but Hawker says further work is needed to control particle size. He also wants to replace the gold nanoparticles with magnetic particles to allow magnetic switching of colour changes.

'This is a beautiful idea illustrating the power of self-assembly. The next step is clearly to organise these into a film – this could be done by shear and changed in an electric field as the anisotropic dielectric properties would facilitate alignment,’ comments Patrick Fairclough, a polymer chemist at the University of Sheffield, UK. ‘This could lead to a full colour flexible display viewable both by back illumination and in full sun.'