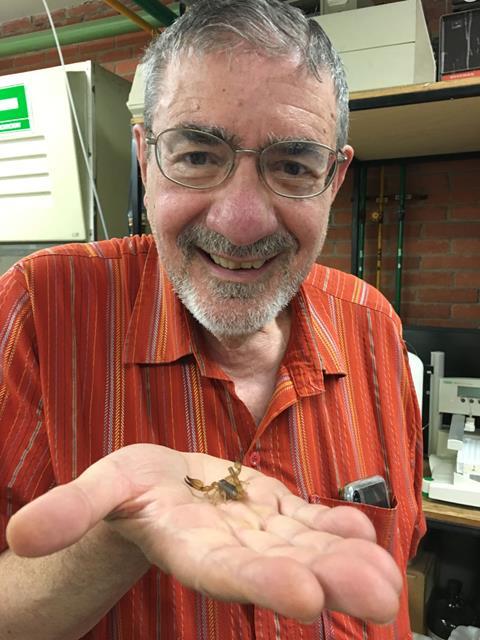 Two compounds isolated from scorpion venom could be promising leads for new antibiotics, particularly against drug-resistant strains of the bacterium that cause tuberculosis. But scorpions won’t have to be ‘milked’ to obtain the precious compounds for potential drugs – the team has synthesised them in the lab too.

Scorpion venom is one the most expensive liquids on the planet, costing in the region of £8.2 million for a litre of the toxin. By comparison, a kilogram of gold costs a mere £34,000. But this hasn’t stopped researchers in recent years from isolating compounds in scorpion venom in the search for new antibacterial, antinflammatory and antimalarial drugs.

However, the venoms from very few species of scorpions have been chemically characterised and most compounds that have been isolated are proteins or peptides. Now, Lourival Possani at the National Autonomous University of Mexico and Richard Zare at Stanford University, US, have teamed up to investigate the venom of a rarely studied Mexican scorpion Diplocentrus melici and discovered that it contains two alkaloid compounds with antimicrobial properties.

‘We hope that these compounds and simple chemical derivatives from them might become new, potent drugs to help people,’ says Zare. ‘The synthesis changes the cost and makes their widespread use feasible.’

Previously, Possani discovered that, oddly, the venom from this species changes colour from white to a dark red when exposed to air. Further investigation showed that it contained two active compounds – one red and one blue. However, Possani’s team is geared towards protein-based structures not other chemicals and so needed help to identify the compounds. Zare had worked with Possani two years ago to identify an alkaloid in a different scorpion venomˡ after they met at a conference. So Possani enlisted Zare’s expertise once again. 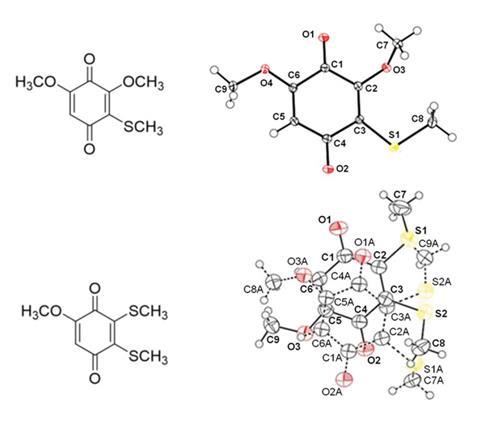 Structures of red (top left) and blue (bottom left) compounds extracted from the venom of D. melici. Corresponding x-ray crystallographic data is on the right with oxygen and sulfur atoms in red and yellow

As the venom is so expensive and hard to obtain the team only had about 0.5µl of venom to work with – ten times less than the amount of blood a mosquito takes in a single bite. Once it had turned dark red, it was dissolved in ammonium acetate, separated and dried to produce red and blue powders. NMR and mass spectrometry then identified the compounds – two previously unknown 1,4-benzoquinines that are almost identical except that the red one has methoxy group on one of its branches while the blue one has a thioether.

Since the amounts of the isolated compounds from the venom were incredibly small, the next step was to synthesise them in the lab so they could be characterised and tested for antimicrobial activity. By establishing the compounds’ chemical ingredients, the team successfully made synthetic versions that matched those in the venom using commercially available precursors.

Subsequent experiments revealed that the red benzoquinone was effective at killing highly infectious staphylococcus bacteria, while the blue one killed both normal and multidrug resistant strains of tuberculosis-causing bacteria.2

‘The most amazing thing to me is that the alkaloid we found is able to kill multidrug resistant TB without damaging the epithelial lining of the lungs of mice,’ says Zare. ‘This encourages me to think that this compound, the blue benzoquinone might become an important drug against TB.’

‘The growing list of natural products with antibiotic activity isolated from venom suggests their potential is considerable,’ comments Kenneth Shea, who investigates the synthesis of new polymers and materials at the University of California, Irvine, US. ‘The 1,4-benzoquinones derived from scorpion venom are particularly interesting due to their broad-spectrum efficacy and their apparent low toxicity.’