Compound crucial in sea and air

An international team of researchers has devised a technique to study how ocean-dwelling microbes respond to a compound that signals good foraging patches for fish and mammals, but also contributes to cloud-forming sulfur aerosols. The research offers further insight into the chemical ecology of marine microbes and how they may influence the world’s climate.

Phytoplankton, which are at the base of the food web in the world’s oceans, produce a lot of dimethylsulfoniopropionate (DMSP). However, while it was previously understood that microbes feed on DMSP as a source of carbon and sulfur, the influence of DMSP over microbial behaviour had remained uncertain.

Now, Justin Seymour at the University of Technology in Sydney, Australia and colleagues at US and Spanish institutions have been able to test the behavioural responses to DMSP of seven different species of marine microbe. They found that six of the species were strongly attracted to it, while one showed no response. 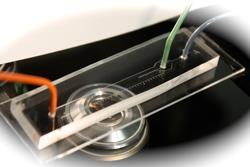 The microfluidic device used to test microbial chemoattraction towards DMSP

The team simulated conditions in the ocean using a lab-based microfluidic device that contains a central channel and two inlets - one for injecting DMSP and one for introducing microbes. By using a camera attached to a microscope under the device, they could record how microbes moved in response to the DMSP.

’We were surprised by how strong and widespread the response to DMSP was,’ says Seymour. ’Most of the organisms responded to the patches of DMSP, indicating the importance of DMSP in their ecology.’ The team also discovered that two of the microbe species, which typically feed on phytoplankton, may use DMSP as a cue to help find phytoplankton producing DMSP, an idea which challenges previous theories suggesting phytoplankton might release DMSP to deter predators.

’Since DMSP is a good food source, it makes sense that microbes are attracted to it,’ says Ronald Kiene who investigates biogeochemical cycling of sulfur at the University of South Alabama in Mobile, US, adding that the work contains some exciting findings. ’It suggests that DMSP will play a role in the three-dimensional distribution of these different organisms as they orient around sources of DMSP,’ he comments. ’This will undoubtedly affect how these organisms interact with each other as some can be prey for others.’

Understanding such microbial interactions could be important for elucidating how oceanic microorganisms contribute to the global sulfur cycle and possibly climate since DMSP is also broken down by some microbes to produce dimethyl sulfate (DMS) - a volatile form of sulfur that oxidises readily and is involved in cloud formation.

’It remains to be demonstrated how the microscale structuring of the microbial community will affect the ultimate production of DMS, but this is likely to be important and needs further study,’ suggests Kiene.