Computer memory made from sugar cube

A sugar cube that functions as computer memory has been created by scientists in the US. The sugar-based metal–organic framework infused with rubidium hydroxide can be switched between high and low resistance states, in a similar way to resistive random-access memory (RRAM).

Metal–organic frameworks (MOFs) are made from organic molecules held in a 3D lattice by metal ions or clusters. Typically porous, they are widely investigated for storing gases, such as hydrogen for fuel. But Bartosz Grzybowski and colleagues at Northwestern University in Evanston, Illinois, have been investigating MOFs for storing something entirely different: information.

In most computers, permanent information storage is left to magnetic hard disk drives or flash memory. However, these technologies could soon be supplanted by other, denser forms of information storage, such as RRAM. In this nascent technology, a component that is normally insulating in an ‘off’, or ‘0’, state can be turned ‘on’, or to a ‘1’, by applying a high voltage that changes its chemical structure.

Normally, RRAM components are based on semiconductors, such as silicon dioxide. Grzybowski and colleagues’ RRAM consists of a MOF containing ?-cyclodextrin, a type of sugar, and rubidium ions. ‘Literally, it’s just a cube of sugar,’ says Grzybowski. ‘It can be eaten.’ 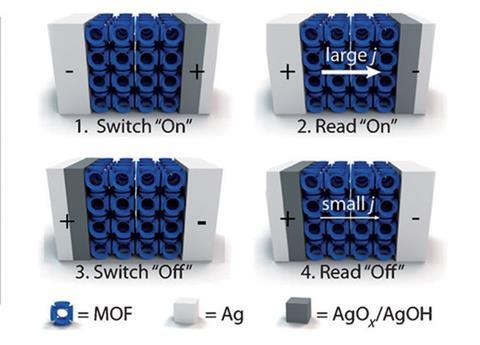 A large voltage switches between the on and off states by oxidising the silver electrodes; a smaller voltage reads out the state

The insulating ‘0’ state is non-volatile, meaning it can be read numerous times without being lost. In contrast, the ‘1’ state slips back into a ‘0’ during reading, as the left electrode gradually oxidises. The researchers claim this degradation could be counteracted by refreshing the state between reading cycles with another large negative voltage.

Tony Kenyon, an electronic engineer at University College London, says the sugar-cube memory’s performance is far lower than RRAM based on semiconductors. He also says that the memory would not be compatible with existing complementary metal oxide semiconductor (CMOS) technology, the staple of modern computing. ‘But that’s not to say there aren’t other applications, which could be very interesting,’ he adds.

In fact, Grzybowski has his sights on unconventional applications. ‘Commercial RRAMs have faster read and write times, but we believe that we can make ours cheaper and definitely greener,’ he says. ‘We’re thinking along the lines of a biodegradable memory.’