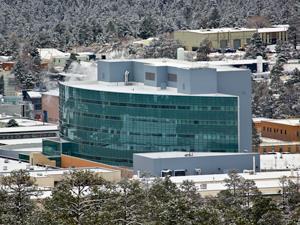 Two bizarre, apparently contradictory properties have been discovered in samarium hexaboride by researchers in the UK and the US. They appear to show that, at low temperatures and extreme magnetic fields, the material is both a conductor and an insulator simultaneously. The researchers have not yet explained this, but they are considering some quite revolutionary possibilities.

The thermal, electrical, magnetic and optical properties of metals, semiconductors and doped semiconductors depend on the movement of electrons between states around the Fermi energy – the boundary between valence and conduction bands. Physicists therefore often characterise a metal or semi-metal by mapping its Fermi surface – an abstract construction showing the momenta of electronic states at the Fermi energy. In insulators, the Fermi energy falls in a band gap, so there are no states there and therefore no Fermi surface.

Samarium hexaboride is an unusual type of insulator called a Kondo insulator, in which hybridisation between the d and f orbitals opens up a gap at the Fermi energy, effectively localising the electrons and turning the material into an insulator at low temperatures. However, when the researchers, led by Suchitra Sebastian at the University of Cambridge, cooled the material to almost absolute zero and measured its magnetic moment in fields up to 40 Tesla, they found that it oscillated periodically as the field was raised.1 This is common in metals, as the fields cause the states to split into multiple magnetic energy levels, and the properties change as different states are raised or lowered through the Fermi energy. In fact, these oscillations are often used to map the Fermi surface of a material. However, they are not supposed to occur in insulators as there are no states near the Fermi energy. A group headed by Lu Li at the University of Michigan recently observed quantum oscillations in the magnetic moment of samarium hexaboride, but they concluded these arose from the surface, suggesting that the compound was a member of a recently discovered class of insulators with conductive surfaces called topological insulators.2 However, Sebastian’s group concluded that its own observations were more consistent with bulk quantum oscillations.

This leads to two seemingly contradictory conclusions: the material has a high electrical resistance and is therefore, by definition, an insulator, and yet it has a Fermi surface, which only occurs in a conductor. Indeed, when the researchers mapped the Fermi surface, it appeared to be that of a very good conductor. ‘How can an electron be localised and delocalised at the same time?’ says Sebastian. ‘That’s the conundrum.’

The researchers suggest multiple possibilities. The most conventional, although still quite radical, explanation is that, if the gap between valence and conduction bands is small enough, as in samarium hexaboride, electrons can jump the gap and enter the conduction band. However, certain features of the quantum oscillations appear different from those of a conventional metal. Other possible explanations could be that the material is poised near a quantum phase transition and fluctuates between conductor and insulator or, finally, that the material is a previously undiscovered phase of matter that is neither metal nor insulator but has features of both. ‘I think the theory would need to be worked out before one could say definitively which is more likely than the other,’ Sebastian concludes.

Condensed matter theorist Joel Moore of the University of California, Berkeley and Lawrence Berkeley National Laboratory is intrigued. ‘Maybe the most exciting [experiments] are the ones where we don’t immediately know what the experiment means,’ he says. ‘I hope it leads to an interesting explanation.’ Li, however, sounds a note of caution, suggesting that the differences between the current results and those of his own group are relatively minor and insufficient to justify the radical conclusions drawn. ‘If it’s true, it’s wonderful,’ he says. ‘I’m happy to see the progress in the field. I’m just a little bit nervous.’