Controversial theory of smell given a boost

Molecular vibrations may be responsible for our ability to distinguish between different odours, new experiments show 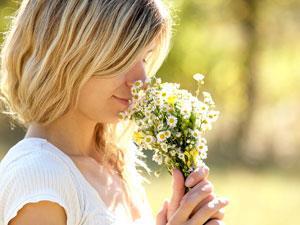 Good vibrations? Is our ability to distinguish between smells all down to the vibrations of odour molecules?

Humans can smell the difference between ordinary and deuterated organic odorant molecules, according to a new study by researchers in Greece. They found that, provided a sufficiently large number of hydrogen atoms in the molecules are replaced by deuterium, their differing smells are relatively easily detected by most people.1

This is the first evidence that humans can discriminate isotopes by smell. The researchers, led by fragrance chemist Luca Turin of the Alexander Fleming Research Centre in Athens, believe the result offers strong support for Turin’s controversial theory of olfaction, according to which smell receptors sense the vibrations of odorant molecules.2

Deuteration of odorants should provide a good test of the idea, because it barely alters the shape of the molecules at all but could shift their vibrational frequencies substantially. One earlier experiment in 2004 by Leslie Vosshall and Andreas Keller of the Rockefeller University, US, reported that human subjects found no aromatic difference between deuterated and undeuterated acetophenone, which has a sweet, fruity smell.3 But in 2011, Turin and his collaborators found that fruitflies respond differently to these two compounds.4

Now Turin’s team, including chemists at a Greek fragrance firm, repeated the experiments on acetophenone and confirmed the findings of Vosshall and Keller. But acetophenone has only eight hydrogen atoms that can be deuterated. When the researchers performed the same tests on a variety of musk-scented odorants, such as cyclopentadecanone, which have 28 or so potentially exchangeable hydrogens, they found that differences in smell became apparent when more than about half of these were substituted. Participants reported that the smell of the deuterated molecules was more ‘burnt’ or ‘roasted’.

Turin’s work on olfaction has long excited controversy, and this paper seems likely to be no exception. His mechanism for how smell receptors work differs dramatically not just from conventional views but from anything else known in molecular biology. Most signalling receptors are thought to be activated by binding molecules through a kind of lock-and-key geometric fit. But Turin believes that olfactory receptors in the nasal cavity sense odorants not by shape, but by their vibrational spectra. He proposes that molecular vibrations can help electrons to tunnel quantum-mechanically between two parts of the receptor.

This idea might explain some of the peculiarities of olfaction: why molecules with very different shapes elicit similar smells, while almost identical molecules can have quite different smells. For example, benzaldehyde and hydrogen cyanide both smell of bitter almonds, while merely replacing a tetrahedral carbon atom with silicon, for example, in 1,1-dimethylcyclohexane, can transform its odour. In such cases, similarities and differences in vibrational spectra do not necessarily reflect those in molecular structure.

But although vibrationally assisted electron tunnelling – an example of quantum effects having biological consequences – has been shown to be physically plausible,5 it is too unorthodox a notion for many biologists, and has been criticized by Vosshall and others.3

In the latest experiments, the controversy begins even before one gets to the interpretation. The team deuterated the musk odorants by warming them with D2O in a hydrogen atmosphere and used gas chromatography to separate and purify the odorants before volunteers got a whiff of them as they left the apparatus. They used ‘sham deuteration’ – the same heat treatment but with H2O – as a control.

While feeling that the findings are ‘certainly a step forward towards a better understanding of a mechanism of olfaction’, food chemist Varoujan Yaylayan of McGill University in Quebec wonders if the deuteration reaction might reduce the odorants to smelly, non-cyclic alcohols and aldehydes. ‘Similar aldehydes are known to generate burnt, roasted, toasted or nutty notes in smell at very low concentrations,’ he says. ‘Sham deuteration won’t detect this.’

Turin discounts such effects, saying that ‘degradation products would be smaller or perhaps bigger, and would not exit the gas chromatograph at the same time’. Theoretical biophysicist Ilia Solov’yov of the University of Illinois at Urbana, US, who works on quantum effects in biology, find the experiments persuasive: ‘They are very nicely prepared and done carefully. The protocols are convincing and accurate.’

But Solov’yov cautions that even so, testing human smell is very challenging. ‘I’m not convinced the results prove unequivocally that humans do distinguish deuterated odorants,’ he says. ‘I understand that it’s difficult to draw precise conclusions for human smell tests, as there are always too many factors that may influence their decisions.’

Even if the findings are sound, do they support Turin’s hypothesis? Vosshall says that several other explanations are possible. First, she says, ‘there may be impurities that can’t be detected by gas chromatography. There are many cases in chemical ecology where minute quantities of impurities account for the perception of the stimulus.’

She adds that ‘the olfactory membranes are loaded with enzymes that can metabolise odorants, changing their chemical identity and perceived odour. Deuterated molecules would be poor substrates for such enzymes, leading to a chemical difference in what the subjects are testing.’

Turin says that, if the vibrational theory is right, it might be widespread, since G-protein-coupled receptors involved in olfaction are very common in physiological signalling. ‘This raises the awe-inspiring possibility that half of physiology and pharmacology may be vibration-based,’ he says.

But Vosshall believes that ‘ultimately, any attempt to prove the vibrational theory of olfaction should concentrate on actual mechanisms at the level of the receptor, not on indirect psychophysical testing’. Turin recognises that this is probably the only thing that will convince the sceptics. ‘I suppose a definitive experiment would involve direct detection of the electron current elicited by odorant binding in the receptors. We’re working on that.’