Coolant to put electric cars in the fast lane 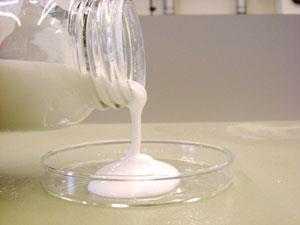 Battery temperature is critical for performance and safety, but it’s a tricky business cooling the large batteries needed for electric vehicles. Now, scientists in Germany have developed a new coolant which promises to cool batteries on hot days.
The coolant is a dispersion which mixes water and paraffin along with stabilising surfactants or tensides and a dash of the anti-freeze glycol. The advantage, say its developers, is that it functions better than air or water cooling of batteries in extremes such as long road trips.

‘With the melting and solidifying of the paraffin, great amounts of heat will be absorbed and emitted,’ explains developer Tobias Kappels of the Fraunhofer Institute for Environmental, Safety and Energy Technology in Oberhausen, Germany. ‘The heat capacity of the fluid is twice to triple as high as the heat capacity of water in a temperature interval of 10°C.’

When a battery’s temperature is too low it may not provide adequate power. Too high and undesirable reactions will degrade it and may even result in fire. In small phone or laptop batteries the surface area to volume ratio is relatively high and air cooling works fine. Larger battery packs like those used to power cars are much more difficult to cool with air.

The new coolant depends on the principal of latent heat. As the battery heats up the solid paraffin droplets in the coolant melt, absorbing the heat in the process. When it cools, the droplets revert to their solid form. Kappels says the surfactants are critical. ‘Even when the paraffin loses the tensides due to thermal or mechanical stress, the tensides get back to the paraffin particles and prevent agglomeration,’ he explains.

A 10°C temperature increase can reduce the battery lifetime by a factor of two, notes Dirk Uwe Sauer, a battery researcher at RWTH Aaachen University, Germany. ‘If the heat [from the battery] can be absorbed efficiently the temperature increase, especially at neighbouring cells, is limited and therefore the risk of an avalanche-like thermal runaway throughout the battery pack is reduced,’ he explains. ‘What is not clear to us is, if the coolant proposed by Fraunhofer is stable in the vehicle over years. We have some doubts about this, but maybe they have found some additives to solve this problem.’

Kappels says tests with batteries have not been carried out yet, but that he hopes to have the coolant ready for the market at the end of the year. ‘The greatest challenges are to adopt batteries for use with cooling fluids and to optimise the cooling cycle,’ he adds.