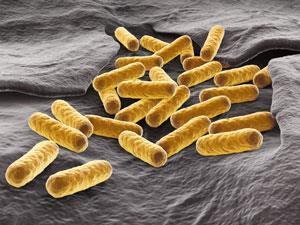 Copper is known for its antimicrobial properties, but new research suggests that copper signalling within bacterial cells may also play an important role in antibiotic resistance. Researchers in China have found that some antibiotics cause copper to accumulate inside Escherichia coli, which prompts them to switch on their defences.

‘Antibiotic tolerance has long been linked to intracellular metal ion homeostasis,’ says author Peng Chen, from Peking University. ‘But the direct involvement of copper in bacterial antibiotic resistance has not been reported before now.’

The team were investigating an antibiotic resistance pathway called Mar, where the genes that allow bacteria to break down and expel antibiotics are regulated by a protein called MarR. Normally, MarR is bound to the DNA which prevents resistance genes being expressed, but when the bacterium is under attack by antibiotics or toxic chemicals, MarR detaches from the DNA activating the Mar pathway.

In vitro studies on various metals by Peng’s team showed that copper caused MarR to dissociate from DNA, and further investigation showed that introducing copper to E. coli increased the expression of antibiotic resistance genes. ‘Copper oxidises a cysteine residue on MarR to generate disulfide bonds between two dimers,’ says Chen. This leads to the formation of MarR tetramers which dissociate from the DNA.

The team used fluorescent probes to investigate how this copper signal is linked to antibacterial compounds. They found that the antiseptic salicylic acid and the antibiotics norfloxacin and ampicillin all generate reactive oxygen species such as hydrogen peroxide, which damage copper-containing bacterial membrane proteins and oxidise copper(I) to copper(II) which accumulates in the cell cytoplasm.

The findings further our understanding of what causes resistance, says Chen, which may help reveal new ways to prevent it. ‘The copper signal is turned on by antibiotics,’ he says, ‘so developing chemical methods to disrupt this linkage may serve as a promising strategy to control the emergence of resistance.’ He adds that it is likely that copper signalling is important in other bacterial species, such as resistant strains of Mycobacterium tuberculosis, which cause TB.

David Livermore, an expert in antibiotic resistance from the University of East Anglia, UK, praised the study’s ‘elegant molecular work’. But he also points out there are other pathways that must be addressed in the fight against resistance. ‘The Mar system can modulate low-level multidrug resistance in E. coli, but most substantial clinical resistance depends on acquired, plasmid-mediated genes.’