Japanese researchers have made artificial DNA that acts like the real thing, even forming right-handed duplexes with complementary artificial strands. The team, led by Masahiko Inouye at the University of Toyama, made the new strands from four artificial DNA bases, which they attached to a sugar backbone using ethyne bonds. 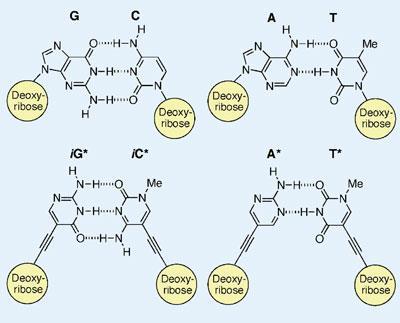 Inouye and his team built their artificial DNA by converting the artificial base-sugar complexes to phosphoramidites and then used a DNA synthesiser. The problem with this, explains Inouye, is that it only allows them to make short DNA molecules, not long enough to encode information. ’The next aim of the research is ligation and duplication of the artificial DNA from its components with naturally occurring enzymes,’ he adds.

Richard Roberts, associate professor of chemistry and chemical engineering at the University of Southern California, US, described the Japanese research as ’a nice piece of work’. However, he is doubtful that enzymes exist that will polymerise the nucleotides to form chains longer than 20-100 bases.

There is every possibility that the artificial DNA could interact with natural DNA, says Inouye. However, should the technology be applied to fields such as gene therapy, the ’artificial DNA must be further investigated in terms of its toxicity and binding affinities,’ he cautions. The artificial DNA needs to be improved before it can have biomedical applications, adds Inouye. His team now wants to experiment with other artificial base candidates.

Many systems biologists dream of developing so-called orthogonal DNA systems that can be put into living cells without interfering with normal living systems. Paul Freemont, professor of protein crystallography at Imperial College London, considers that Inouye’s work could fit into this category.   ’So far they’ve just used chemistry to synthesise this, which is interesting and a really good start but to be really, really useful you would want this to be orthogonal to the normal DNA code and to have all the machinery to accept and translate this code into a desired function.’ Such a development is ’miles away,’ he acknowledges.