Mars rover picks up chlorinated hydrocarbons on the Red Planet, but are they native or did they hitch a ride? 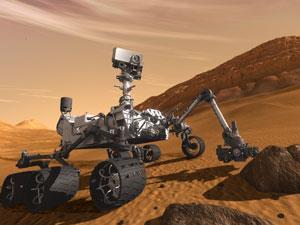 Has Curiosity seen signs of complex organic molecules on Mars?

Nasa’s Curiosity rover has detected a range of chemical species including chlorinated hydrocarbons on the surface of Mars – indicators that point to the presence of complex organic molecules. However, we shouldn’t jump to conclusions just yet. The source of carbon remains unknown with the possibility that trace amounts hitched a ride from Earth, Nasa scientists say.

The search for organic compounds – the building blocks of life – on Mars is one of Curiosity’s key objectives. Central to this search is the Sample Analysis at Mars (SAM) suite on board Curiosity. Using a small oven to heat soil samples taken from a site dubbed ‘Rocknest’ – a drift of windblown dust and sand – SAM analysed the gases that were produced.

‘It is still very early in the mission and we are still interpreting the data,’ says Rafael Navarro-Gonzalez at the National Autonomous University of Mexico in Mexico City, who is a co-investigator in the SAM team of Curiosity. ‘But certainly it is interesting to see that there is a large number of chemical species that originates from the heating of the Martian soil such as water vapour, CO2, and SO2.’

Curiosity’s initial tests have confirmed some of what was known or suspected from previous missions, but there is something new. Intriguingly, SAM detected the release of chloromethanes when the soil was heated, suggesting that chlorine was reacting with hydrogen and carbon. ‘The origin of the chlorine species is certainly from Mars; however, the source of organics needed for the production of chlorinated organics is still unknown,’ says Navarro-Gonzalez.

‘The interesting thing about chloromethane is that it is reduced carbon,’ says Nasa scientist Mitch Schulte. ‘Finding reduced forms of carbon hints that there may be processes that can result in organic carbon, which is interesting from a biology perspective.’ Schulte adds that it is possible that the heating process could generate these chloromethanes, so they may not be native to Mars.

That said, the presence of chloromethanes is tentatively thought to be a signature of perchlorates in the soil. Perchlorates were previously detected in polar latitudes by the Pheonix mission in 2008 and a study by Navarro-Gonzalez and colleagues in 2010,1 which reanalysed data from the Viking mission in the 1970s, hinted that both organics and perchlorates were present at both landing sites at mid-latitudes.

‘The presence of perchlorates implies a source of chlorine, which was most likely derived from briny water or volcanic activity in the past – an important consideration for climate evolution and habitability,’ says Sushil Atreya, a Mars expert at the University of Michigan in Ann Arbor, US.

‘The results so far obtained by SAM demonstrate that these chlorinated hydrocarbons are produced simultaneously in the oven when both organics and perchlorates are heated and corroborate partially our conclusions about the presence of perchlorates in the Martian soil as investigated by Viking,’ says Navarro-Gonzalez. ‘But we still need to wait until we get more results from SAM and determine the origin of the organics.’

These results are not completely unexpected, however. ‘I was not entirely surprised that SAM gave no definitive evidence of organics in the sand at Rocknest,’ Sushil says. ‘The key to the existence of organics is preservation. The surface has been exposed to solar ultraviolet radiation, galactic cosmic rays, convective electric fields and oxidants from the air and regolith, all of which would tend to destroy any organics in the soil.’

‘As Curiosity marches to Mount Sharp to examine the older layered terrains, we can expect surprises,’ Sushil adds. ‘The journey has only just begun.’ And if Curiosity’s journey wasn’t enough, Nasa has announced this week that it plans to send a new rover with new instruments to the Red Planet in 2020.