What revelations caused the biggest buzz in chemistry labs around the globe during 2009? With the help of an expert panel of journal editors, Chemistry World reviews the ground-breaking research and important trends of the year’s published chemical science papers.

DNA origami, the folding of DNA into shapes on the nanoscale, moved from 2D into 3D during 2009. Hao Yan’s team at Arizona State University kicked off this craze with a tetrahedron shaped 3D container made of DNA.1 A day later, Danish researchers led by Kurt Gothelf, from Aarhus University, published details of a nanosized 3D DNA box that can be locked or opened in response to ’keys’ made from short strands of DNA [Chemistry World (CW) June, p27].2 Because these structures are hollow they can potentially carry cargo for applications such as drug delivery. 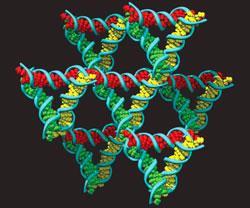 There was also a leap forward in our fundamental understanding of DNA, when Erwin Peterman of Vrije University in Amsterdam, the Netherlands, and colleagues finally unravelled the mystery of what happens to a molecule of DNA when it is stretched to breaking point. When pulled, DNA first resists stretching, then suddenly unzips from each end into single stranded DNA - remaining zipped together in the middle (CW December, p26).6

Hagan Bayley from the University of Oxford unveiled a technique to electrically detect and differentiate individual bases in a single strand of DNA that could lead to a simple and affordable sequencing method for individuals’ DNA (CW April, p23).7

2009 saw the modification of some well known techniques to give an unprecedented close up view of molecules and atoms. Most impressive was the non-contact atomic force microscopy image of pentacene (five benzene rings fused in a line) achieved by Leo Gross and co-workers at IBM Research in Zurich, Switzerland. This was the first time that all the atoms and bonds in a molecule had been imaged (CW  October, p24).8 Using the same method they were also able to image the amount of charge on single atoms.9

A non-contact atomic force microscopy image of pentacene, showing all the atoms and bonds

Later in the year, a team at Kharkov Institute for Physics and Technology, Ukraine, gave the first ever glimpse of atomic orbitals. Using field-emission electron microscopy, they were able to directly image the electron density surrounding a carbon atom - unveiling the shapes of both s- and p-like orbitals (CW October, p4).10

US scientists demonstrated the remarkable power of magnetic resonance imaging (MRI) by adapting it to create 3D nanoscale pictures of a tobacco mosaic virus. The group, led by Daniel Rugar at IBM’s Almaden Research Center in California, hope their technique will eventually allow researchers to analyse the 3D structure of large biological molecules at atomic resolution without damaging them (CW February, p28).11

Peering more closely at the world around us revealed some surprises, such as finding pentagonal ice. Javier Carrasco at the Fritz-Haber Institute of the Max Planck Society in Berlin, Germany, found that water molecules arrange in a pentagonal manner on a copper surface - crushing previous beliefs that the crystal structure of bulk ice is always hexagonal.12

An extraordinary allotrope of elemental boron was uncovered by Artem Oganov at Stony Brook University, New York, and team. This new form, containing B2 and B12 clusters, was particularly surprising because it is held together by ionic bonds (CW March, p5).13

Additionally, the first video evidence that carbon nanotubes turn as they grow was obtained. Using field emission spectroscopy, Stephen Purcell’s group at the University of Lyon 1, France, showed that carbon atoms add in a regular pattern to the tip of a rotating tube (CW September, p26).14

Catalysing basic knowledge A number of significant fundamental insights into catalytic processes were seen during 2009. This included work by Tobias Ritter and David Powers from Harvard University that boosted our understanding of widely used palladium catalysts - showing for the first time that palladium(III) complexes can take part in the formation of carbon-heteroatom bonds. Previously, only Pd(II) and Pd(IV) complexes were though to be involved (CW July, p29).15

Stephen Buchwald at the Massachusetts Institute of Technology and Carsten Bolm at Aachen University in Germany spent the year playing a game of ’which metal is catalysing your reaction’. In 2007 Bolm announced the first copper-free iron-catalysed cross-coupling reaction, but investigations by Buchwald in 2009 showed that tiny amounts of copper impurities in the iron catalyst have been catalysing the reactions all along (CW August, p4).16

The size and shape of nanocatalysts was under the microscope again, with two groups devising routes to controlling the shape of smaller particles than ever before. Matthias Ballauff and team, at the University of Bayreuth in Germany, developed a method for creating 2-5nm platinum crystals with well defined surfaces.17

In a separate study Francisco Zaera at the University of California, Riverside, made tetrahedral crystals of a similar size and used them in cis-trans isomerisation reactions (CW March, p29).18

Climate change and green energy has dominated the headlines during 2009, thanks to the UN Climate Change Conference held in Copenhagen, Denmark, in December. There were a number of unexpected revelations about how chemicals in our atmosphere are effecting climate change, including the scary discovery by Kimberly and Ryan Prather, from the University of California, San Diego, that sulfate and nitrate particles previously thought to help combat global warming (because they reflect sunlight), when combined with soot could instead enhance global warming (CW August, p4).19

Additionally, Akkihebbal Ravishankara’s team at the National Oceanic and Atmospheric Administration in Boulder found that nitrous oxide is currently the most important manmade substance reducing atmospheric ozone. The impact of this chemical has previously been overlooked (CW October, p4).20

In the energy area, there has been ongoing progress in research using sunlight to split water - generating hydrogen and oxygen. One potential breakthrough was a new system that doesn’t need rare noble metals, developed by Richard Eisenberg and colleagues at the University of Rochester. Their system used a molecular photocatalyst containing cheap and abundant cobalt.21

The efficiency of dye-sensitised solar cells (DSSC) crept up again during the year. In an alternative approach, a team led by Licheng Sun at the Royal Institute of Technology at Stockholm, Sweden, suggested that a DSSC with a photoactive anode could be combined with a photoactive cathode-type cell to make a tandem DSSC that would in theory be twice as efficient (CW  June, p4).22

Another interesting development was the growing realisation, pioneered by Dan Nocera at Massachusetts Institute of Technology, that instead of improving the efficiency of solar devices, researchers should instead be developing cheaper technology to allow widespread implementation. The green chemistry arena saw an increasing number of novel routes to convert waste into useful products. Examples include an efficient electrochemical method to turn urine into hydrogen fuel, developed by Gerardine Botte of Ohio University (CW August, p25),23 and super-efficient catalysts for converting waste carbon dioxide emitted from power stations into cyclic carbonate molecules, devised by Michael North’s team at the University of Newcastle (CW December, p29).24

Graphene, the single atom thick layer of carbon, hogged the spotlight yet again in 2009. One fascinating finding was that electrical conducting graphene can be reversibly hydrogenated to electrically insulating graphane, using atomic hydrogen. Daniel Elias’s team, at the University of Manchester, hope their technique will boost the prospects of graphene-based nanoelectronics (CW March, p23).25 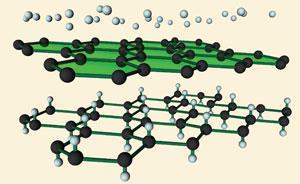 Other work edging these devices closer to reality included state-of-the-art routes to chop graphene into smooth edged bite-size pieces. A technique developed by Pablo Jarillo-Herrero’s team at the Massachusetts Institute of Technology involved depositing nickel nanoparticles onto the surface of graphene and then heating it. The nickel then undergoes a thermally-activated catalytic reaction with the carbon - chewing it up in to small pieces and giving off methane (CW August, p25).26

Two other teams took a different approach - unzipping multi-walled carbon nanotubes to make ribbons of graphene. James Tour from Rice University and colleagues used oxidising potassium permanganate to do this.27 Liying Jiao’s team from Stanford University, instead emdedded the tubes in a polymer film and then zapped them with argon plasma.28

In the diagnostics area, Harvard University’s George Whitesides continue his quest to develop affordable microfluidic technology for healthcare applications in the developing world. He turned a sheet of paper into a lightweight, foldable electronic display for medical tests - costing less than 6p per square metre.29

Zhigang Wu and coworkers from Uppsala University in Sweden, devised a lab on a chip system that can separate live bacteria from blood samples to aid quick clinical diagnoses.30

Meanwhile, Donald Ingber’s group at Harvard Medical School made a microfluidic device that removes toxic pathogens from large volumes of blood for treating patients with septicaemia.31

Clinical tools for diagnosing prostate cancer saw further improvements, with Chad Mirkin’s team at Northwestern University developing a test that can detect the recurrence of the disease years earlier than currently possible. His bioassay uses gold nanoparticles and DNA as amplification agents to detect a prostate specific antigen, and is 300 times more sensitive than commercial assays.32

In a separate study, Arul Chinnaiyan and coworkers at the University of Michigan Medical School found that high levels of sarcosine - the methylated form of glycine - in urine is indicative of prostate cancer. They say that measuring this compound will give medics a snapshot of how the disease is progressing (CW April, p28).33

Meanwhile, Luc Brunsveld, of the Eindhoven University of Technology in the Netherlands, and colleagues bolstered our fundamental understanding of the disease by studying how proteins bind to the androgen receptor that is linked to prostate cancer.34

Interesting story? Spread the word using the ’tools’ menu on the left

DNA triangles have been designed that self-assemble into three-dimensional, macro-sized crystals

Reading DNA base by base

A tuning-fork-like device that measures atomic forces can image every single atom in a molecule, according to its Swiss inventors

MRI at the nanoscale

Scientists provide proof that nanotubes rotate as they grow

Nanocrystals get in shape for catalysis

Nitrous oxide is the single most important ozone depleting substance and emissions must be curbed, say scientists

Graphene to graphane by chemical conversion

Graphene can be reversibly converted into its electrically insulating alter ego, graphane

Finding a bacterium in a blood sample

How do you separate bacteria from small biological samples? A lab-on-a-chip device that does just that offers hope for diagnostics

The medical power of attraction