The small hive beetle invades colonies of the European honeybee (Apis mellifera) but not of the African strain. Researchers in the US have now found that the bee’s very own chemical alarm signal plays an important role in the beetle’s success.

Peter Teal and colleagues at the University of Florida used analytical techniques, including GC-MS, to study the chemical messengers (pheromones) that bees send out when they are under stress. The researchers were surprised to find that the parasitic beetle can detect at least one of the bee’s alarm pheromones, isopentyl acetate (IPA), with a much better sensitivity than the bee itself. Thus, the beetles can rely on the bee’s chemical signals to localise bee hives, and to congregate in large numbers on bee hives that are already in trouble. 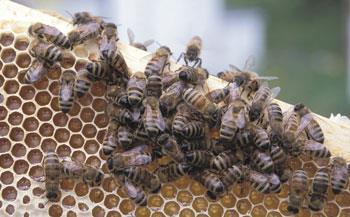 To make matters worse (for the bees), the beetles often carry a fungus that is also able to produce IPA. Once the beetles have started invading a bee colony, they will spread this fungus, which will add to the IPA production and attract even more beetles to the site.

Bees have an established behavioural response which involves imprisoning individual intruders. But while this strategy appears to work well for the African honeybee, European honeybees in North America are often forced to abandon their hives when the beetle infestation becomes overwhelming. Teal’s team thinks that a reduced sensitivity towards their own alarm pheromone, combined with other reductions in natural stress responses, may give the beetle the edge over its host.

But does this research give any clues to the causes of the mysterious disappearance of entire bee colonies over this winter, which has affected up to 70 per cent of colonies in some regions of North America and is now also reported throughout Europe? Entomologists believe that the small hive beetle cannot be the main cause of the problem seen in North America and Europe, as the parasite doesn’t occur in Europe at all. Possible causes that have been mooted for the mysterious colony collapse disorder (CCD) range from biological (mites) to the inadvertantly man-made (mobile phones, pesticides, GM crops), and even to allegations of poor practice among bee keepers or compensation fraud.

Bernard Vaissiere, who studies the ecology of bees at the French research centre INRA in Avignon, told Chemistry World: ’I do not think that there is a link between the greater susceptibility of the European honeybee to the small hive beetle and colony collapse disorder. CDD seems related to lower immune defenses of honeybees, while susceptibility to small hive beetle is behaviourally expressed.’