Debate over microwave boost to reactions rumbles on 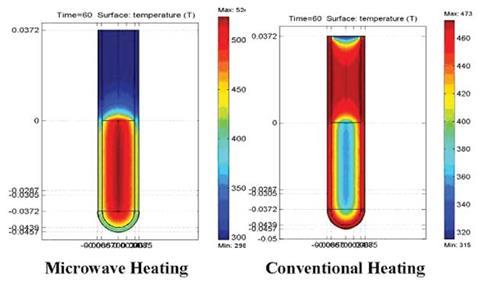 The question of whether or not microwave heating can give a boost to the rate of organic chemical reactions has stoked controversy. Now, researchers at Florida State University report two new papers that support a microwave-specific heating effect.

In the first paper, allyl p-nitrophenyl ether (ApNE) dissolved in naphthalene was studied under microwave heating and conventional heating. Under constant microwave power, a four-fold rate enhancement is reported in microwave heating over convective.1 This was attributed to selective heating of ApNE, a microwave-absorbing reactant in a non-absorbing solvent.

The second paper reported acceleration of Friedel–Crafts benzylation of arene solvents using microwave energy.2 This was attributed to selective microwave heating of polar solutes. This is a follow-on from a 2012 preliminary report in Chemical Science, with the experiments repeated using internal temperature monitoring, as well as external thermometers, with several control experiments added for good measure.

In all cases, convective heating experiments matched Arrhenius predictions; however, microwave heated experiments matched or exceeded Arrhenius predictions, says Dudley. He adds that if you wish to observe the effects of selective heating, then programming the microwave to regulate the sample’s specific temperature is a poor choice. ‘This perhaps gets at part of the source of the controversy. Almost all modern microwave chemistry is done in temperature-control mode,’ says Dudley.

His colleague Albert Stiegman, senior author on the second paper, explains: ‘One can realise a localised heating effect, where the region around the molecules is hotter than the surrounding medium. Obviously, if the absorbing molecule is a reactant then its reaction rate will reflect the localised “temperature” around the molecule. In other words, through this mechanism you can have microwave-specific rate enhancement that is entirely thermal.’

Commenting, Nicholas Leadbeater, a synthetic chemist at the University of Connecticut, US, notes that they are claiming that the highly polar reagent is absorbing microwave energy and you get molecular radiators, where the temperature at the molecule site is higher, so the reaction takes place faster than you would expect from the bulk temperature. ‘Studies we have done in our lab suggest that you don’t get these molecular radiators and that the heat is very rapidly dissipated into the reaction medium in these cases.’

He cautions that even ‘if they are real’ there will only be certain cases where this heating is an option. The reactions reported are unimolecular, taking one reactant and turning it into a product. Most reactions are multi-molecular and it is less likely you will see such effects in these reactions, he says.

‘In their defense, they have gone to great lengths to systematically look at all the different avenues and all the possible variables,’ Leadbeater adds. ‘And certainly in the community there is a lot of chatter about this now. Even if they haven’t selectively heated molecules, they’ve certainly got the community heated up about this and it has reignited the passions of those that believed that a microwave effect existed from the start.’

‘These guys were very detailed on their setups and observations, something the microwave synthesis literature has struggled with for three decades, and why we can’t reproduce many of the publications on this very topic, so my hat is off to them for that,’ comments synthetic chemist David Gunn at lab microwave firm Milestone, who writes the blog Totally Microwave. ‘Also happy to see that we have moved away from the “magic microwave effect” talked about in the general synthetic community to something we can start to get our head’s around: under a certain set of conditions, a highly polar substrate – or highly ionic or high dielectric – can absorb more energy than its environment.’