DNA triangles have been designed that self-assemble into three-dimensional, macro-sized crystals

US scientists have found that DNA triangles can be designed to self-assemble into three dimensional, macro-sized crystals.1 The team hope that the crystals will prove useful in helping determine the structure of other biomolecules, as well as in drug design and molecular electronics.

Ned Seeman, from New York University, first proposed the idea of making crystalline DNA lattices in the early 1980s when he was having problems crystallising biomolecules to determine their structure using x-ray crystallography. He speculated that the holes in the DNA lattice could be used to hold the biomolecules in the same orientation, making them as ordered as they would be in a real crystal and therefore allowing an x-ray structure to be taken. ’That has been a goal of the research program now for almost 30 years,’ explains Seeman. ’We’ve really managed to do it here,’ he adds. 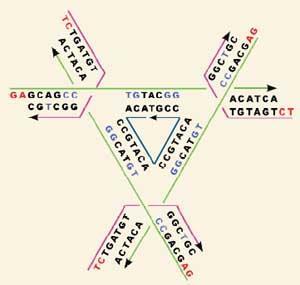 The tensegrity triangles are made up of three DNA helices

The crystals are made up of sub-units called DNA tensegrity triangles - these consist of three helices of DNA constructed into a triangle with three-fold rotational symmetry, where the direction of the helix axes are each on different planes. Each of the ends of the helices have two unpaired nucleotides, called ’sticky ends’. It is these that stick to complementary pairs of bases on other triangles during the self-assembly process, creating well-ordered three dimensional crystals approximately 0.25 mm in size. ’The helically repeating nature of DNA facilitates the construction of a periodic array,’ Seeman explains. 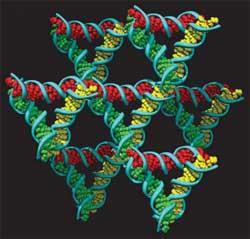 ’Not only can we get this one motif in sequence to self-assemble, but there are eight other crystals that we report in the paper,’ he adds. His team’s rationally designed crystals have different numbers of nucleotide pairs in the DNA helices, ranging from 21 to 42, and therefore have different sized lattice holes.

Now that the team have achieved their 30-year-old goal, they haven’t just sat back and admired their work; instead, they have come up with a host of possible uses for these structures stretching far beyond facilitating the crystallography of biomolecules. ’This is the opening point of a system where we are going to be able to control the structure of matter in 3D to high precision,’ says Seeman.

Three years ago, the team showed that they could self assemble 2D DNA motifs and use them to organise metallic nanoparticles into a pattern.2 And Seeman says that moving this idea into 3D should lead to major advances in nanoelectronics. As well as holding components for molecular electronic and photonic devices, he plans to investigate the structures’ use for making new materials and working out the crystal structures of potential drug targets.

While Seeman admits that there are still a lot of steps needed to reach these goals, this is a man who sticks with an idea until it works. And he says that these steps should be both incremental and feasible, now that the principles behind the design of a 3D crystal and the idea that DNA can be used to organise other structures have been established.

Kurt Gothelf, director of the centre for DNA nanotechnology at Aarhus University, Denmark, agrees with Seeman that there is potential to use these lattices to arrange systems for structure determination, and is very enthusiastic about the work: ’I think it is a fantastic achievement that it has been possible to crystallise this kind of DNA lattice,’ he says.