Russian researchers follow how diamond forms under the Earth's crust 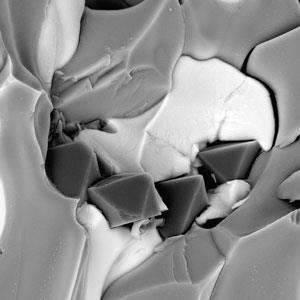 Subduction zones – boundaries between tectonic plates where the Earth's crust sinks into the hot mantle – could be breeding grounds for diamond formation, according Russian researchers. Experiments have revealed the redox reactions that drives diamond formation and explain diamond’s compositional variation, thereby improving our understanding of the processes at work deep inside the Earth.

Although diamond is almost 100% carbon, its physical and chemical properties can vary due to tiny inclusions of minerals and fluids. 'Contrasting heterogeneity of diamond – as seen in the composition of inclusions, nitrogen content and carbon isotopic composition – is one of the most debateable questions of diamond genesis,' says Yuri Palyanov, lead author of the study at the Russian Academy of Sciences in Novosibirsk.

Until now, redox reactions were simply assumed in many diamond formation models but the true mechanism involved remained uncertain. The heterogeneity of diamonds was thought to be a consequence of different isotopic characteristics of carbon materials available at different stages of diamond crystallisation or due to compositionally contrasting agents in the crystallisation medium.

'No experimental studies on diamond formation under conditions found at subduction zones have been performed before our work,' says Palyanov. 'In our work, we demonstrate for the first time that significant heterogeneity can be associated with essentially one process and one carbon source, and assessed the possible scale of the phenomenon.'

The team conducted high pressure, high temperature experiments in chambers that mimicked conditions found at subductions zones. They found that oxidised crust minerals interact with reduced metal-saturated rocks in the mantle below. At temperatures above 1000°C magnesium carbonate and calcium carbonate reacted with iron to form new minerals including iron carbide and graphite.

However, at temperatures above 1200°C and at pressures around 74,000 times atmospheric pressure the team observed a gradient of oxidation states. They saw that in the zone between the carbonates and the iron, diamonds up to a millimetre in diameter formed. Analyses revealed that diamonds that formed in oxidised conditions contained more nitrogen impurities than those formed in reduced conditions.

Palyanov notes that diamond naturally forms under a wide range of temperature, pressures and oxygen concentrations. 'The experimentally reproduced mechanism here is only one of many possible ones,’ he says. ‘We believe that diamonds, formed according to this mechanism could be both of gem and industrial grades.'

'High pressure high temperature experiments, like those reported by Palyanov and co-workers, provide us with direct evidence of the processes and crystal growth mechanisms taking place at these redox fronts,' comments Dan Howell, who investigates diamond formation at Macquarie University, Australia. 'As their results show, a better understanding of these redox processes throughout the entire mantle, not just at deep subduction zones, will greatly benefit our interpretations of this important but inaccessible region of Earth.'