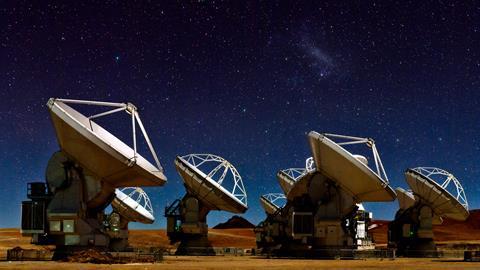 In a first for astrochemistry, astronomers have detected dimethyl ether in a planet-forming disc. A precursor of larger organic molecules that can spur life, dimethyl ether is the largest molecule identified yet in a protoplanetary disc – a rotating cloud of gas, dust and ice that develops around a newly forming star and eventually forms planets.

The discovery was made by researchers at the Leiden Observatory in the Netherlands using the Atacama Large Millimetre/submillimetre Array (Alma) telescope located in Chile. The team also made the first-ever detection in a protoplanetary disc of nitric oxide and the tentative discovery of methyl formate, a complex molecule similar to dimethyl ether that is also a building block for larger organic molecules.

The European Southern Observatory co-funds Alma along with the US, Canadian, Taiwanese and Japanese organisations. 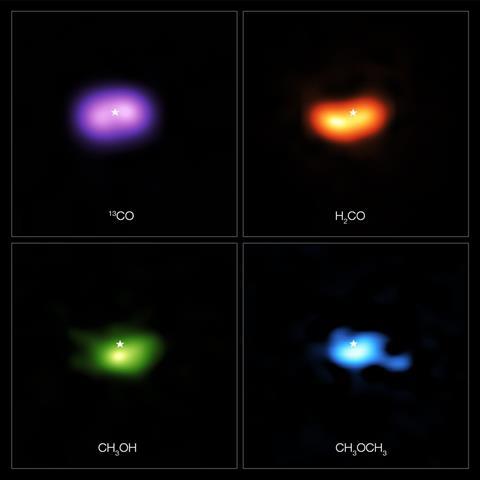 The molecules were found in the planet-forming disc around the young star Oph-IRS 48, which is more than 400 light-years away from Earth. Complex organic molecules like dimethyl ether are thought to arise in star-forming clouds, even prior to the formation of the stars themselves. Atoms and simple molecules like carbon monoxide adhere to dust grains in these cold environments, forming an ice layer and undergo chemical reactions that result in more complex molecules.

The discovery of dimethyl ether suggests that many other complex molecules often found in star-forming regions may also exist on icy structures in planet-forming discs. These molecules are precursors of prebiotic molecules like amino acids and sugars, so investigating their formation and evolution can help elucidate how prebiotic molecules ended up on planets, including Earth.

‘We are incredibly pleased that we can now start to follow the entire journey of these complex molecules from the clouds that form stars, to planet-forming discs, and to comets,’ said Nienke van der Marel, a Leiden Observatory researcher involved in the study. ‘Hopefully with more observations we can get a step closer to understanding the origin of prebiotic molecules in our own solar system.’