A compound containing a stable silicon-silicon bond between two negatively charged pentacoordinated silicon atoms - silicates - has been synthesized and isolated for the first time by Japanese researchers. The new disilicate species offers unexpected insight into silicon chemistry and could be useful for making new conductive and optical materials, say the researchers.

Silicon normally combines with four other atoms to form a tetracoordinated structure, which can form a bond with another tetracoordinated silicon atom. Such structures form the basis of the crystalline silicon used for semi-conductors and organosilicon compounds. Previously, the highest coordination number in silicon atoms to allow for a stable silicon-silicon bond was widely thought to be four.

Now, Naokazu Kano and colleagues at the University of Tokyo and the Institute for Molecular Science in Japan have created a direct Si-Si bond between pentacoordinated silicon atoms of silicates. The result is surprising because such a bond would be expected to cleave due to strong steric and electrostatic repulsion between the silicon atoms. 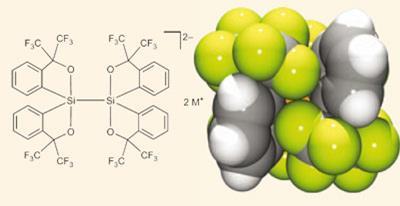 ’This is the first example of such a silicon-silicon bond,’ says Kano. ’And it is quite stable [even under thermal conditions] despite the apparent electronic repulsion and bond dissociation tendency.’

’I find the paper very interesting indeed, and well carried out,’ says Daniel Kost, a silicon chemistry expert at  Ben-Gurion University in Israel. He explains that the reason why the electrostatic repulsion does not cause destruction of the molecule is that the negative charges are only formally on silicon. ’The charges are [actually] distributed among the many atoms surrounding the silicon atoms, leaving the [silicon] positively charged, with no Coulomb repulsions.’

However, Kost remains puzzled at the stability of the dianionic disilicates. ’Neither hydrolysis nor warming up causes decomposition of the compounds, although other hypervalent mono-nuclear silicon compounds tend to decompose rapidly when exposed to air and moisture.’

The team made the disilicate structures  via a reductive coupling reaction of a silane bearing two electron-withdrawing bidentate ligands, used to stabilise the molecule. The result was two silicon atoms that are effectively surrounded by four sets of ligands and bind eight atoms.

Kanoenvisages this kind of bond being useful for making new materials.  ’If we can accumulate the bond in series to form a silicon wire made up of silicate moieties, the [highest occupied molecular orbital to lowest unoccupied molecular orbital] energy gap will be much more decreased which could be helpful in creating  new conductive materials like doped polyacetylene.’ Kano also suggests that such silicon wire could be useful for optical materials like polysilane.

As well as aiming to connect several sets of the silicon-silicon bond chain to form a silicon-wire comprised of silicate chains, the team plans to look at the synthesis of similar bonding between other group 14 element compounds such as germanium and tin.