Scientists in Japan have made an electrode for a lithium-air battery using a pencil. The advance could bring efficient, environmentally friendly and safe batteries for electric vehicles a step closer.

Lithium-air batteries have the potential to produce enough energy to power an electric vehicle, but the amount of energy is a safety concern. Contamination in lithium batteries can result in unstable and high energy reactions, and the current lithium-air batteries are vulnerable to decomposition and burn-out.

Haoshen Zhou and Yonggang Wang at the National Institute of Advanced Industrial Science and Technology in Tsukuba, have designed a battery in which the lithium is encapsulated by an organic electrolyte topped with a ceramic protection layer. The ceramic layer acts as a solid-state electrolyte upon which the team simply drew a 2D cathode using a graphite pencil. Zhou says that ’removing and redrawing the novel air electrode is simple.’ 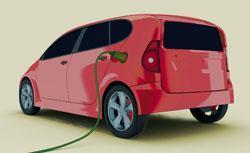 During the discharge process, lithium at the anode surface is converted into lithium ions. Simultaneously, lithium ions in the electrolyte solution pass across the ceramic layer and combine with oxygen in the air to form LixOy within the pencil trace. The battery was able to go through 15 charge-discharge cycles without losing its capacity. This is a lower number of cycles than current batteries, but the design promises a much higher potential energy and can be recharged simply by redrawing the cathode with the pencil.

’Using a solid state electrolyte suppresses detrimental side reactions encountered when using liquid organic electrolytes, improving cyclic stability,’ explains Leela Mohana Reddy Arava, an expert in lithium battery technology at Rice University, US. He adds that ’drawing electrode materials onto the surface of a solid electrolyte is an innovative approach’.