US researchers have developed a new series of combined fluorescent and chemiluminescent dye compounds that can be stored at low temperatures and then activated to release near infrared light when warmed to body temperature. The work could offer safer, more sensitive alternatives for imaging biological systems.

Many imaging techniques used in disease diagnostics and drug development in animal models use radioactive tracer molecules to track and image particular compounds, tissues and metabolic processes. However, radiotracer molecules can damage DNA and their quick decay means that they must be prepared immediately before use and cannot be easily stored.

More recent optical molecular imaging approaches use luminescent compounds such as luciferase enzymes instead, which decay by emitting harmless visible light. The problem is that the emitted light scatters and gets absorbed by molecules and cells, which limits tissue penetration and affects image clarity.

Now, Bradley Smith and colleagues at the University of Notre Dame, Indiana, US, have created a class of compounds that could overcome these problems. Called squaraine rotaxane endoperoxides (SREPs), the compounds comprise highly sensitive dye molecules called squaraines that are placed inside a macrocyclic shell. When irradiated with red light, the squaraine rotaxane oxidises to contain a thermally unstable 9,10-anthracene endoperoxide group. This structure stores light energy as a chemical bond at low temperature and when warmed, releases the energy as near infrared light.

Fluorescent imaging typically requires that a given sample is illuminated, which results in unwanted background light. Importantly, SREPs can provide a chemiluminescent as well as fluorescent signal. ’When it is chemiluminescent we don’t need to illuminate the sample, so there is no background irradiation. In this regard, we can see things deeper and in higher contrast because we can eliminate this bothersome background signal,’ explains Smith. ’On the other hand, it still functions as a fluorescent dye, giving the end user two options when they want to look at tissue after it is removed from the body.’ 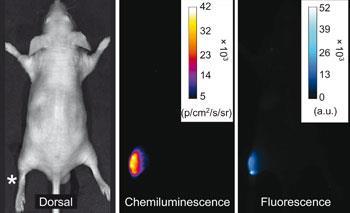 The molecules provide both a fluorescent and chemiluminescent signal, as illustrated in this animal model

Eva Sevick-Muraca, director of the Center for Molecular Imaging at the University of Texas Health Science Center in Houston, US, is enthusiastic about the work. ’Given that commercial small animal systems are unable to sufficiently filter the backscattered excitation light from weak fluorescence signals, the development of red and near-infrared chemiluminescence offers a new opportunity for more sensitive optical molecular imaging,’ she says.

Smith points out that being able to store SREPs indefinitely at low temperatures (below -20?C) means they can be prepared on a relatively large scale, transported and stored easily until needed - a considerable advantage over traditional radiotracers.

’If adequate photon count rates can be collected through tissues, chemiluminescence SREPs may challenge the use of near-infrared excitable (>780 nm) fluorophores currently under development and in use within our device and drug clinical studies,’ says Sevick-Muraca.