Earth's missing xenon could be hiding in quartz

Researchers in Canada synthesise xenon dioxide, adding weight to theory that xenon can bond within quartz

What’s happened to the Earth’s missing xenon? For decades scientists have known that the abundance of xenon is curiously lower than predicted from comparisons with the other noble gases. Yet they have been unable to determine why. Now chemists in Canada have evidence that it is residing in the ground beneath our feet.

Some of the first hints of the anomaly came in the 1970s, when scientists found that xenon is about 20 times less abundant in our atmosphere than other noble gases - even though studies of meteorites suggested its general abundance in the Solar System should be roughly the same. Theories abounded: maybe the xenon has been lost into space, or frozen into the ice caps, or trapped inside sedimentary rock. But calculations showed that these processes could account for at best one-fifth of the missing gas. 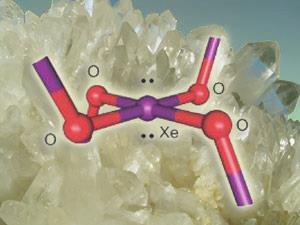 The arrangement has a square planar geometry locally

In 2005, however, researchers discovered that at high temperatures and pressures xenon seems to displace silicon in crystalline silicon dioxide, or quartz. The researchers proposed that xenon atoms swap places with silicon atoms, binding to the two remaining oxygen atoms either side. If this were the case, it could account for the loss of atmospheric xenon in the distant past, perhaps at a time of heavy meteorite bombardment of quartz in the Earth’s crust.

Gary Schrobilgen and David Brock at McMaster University in Ontario have lent new weight to this hypothesis by showing how xenon could bond to oxygen within quartz. They added crystals of xenon tetrafluoride (XeF4) to water at freezing point to produce a yellow-orange solid. Spectroscopy showed that this solid was xenon dioxide (XeO2), which has never been knowingly synthesized before and which could exist in a quartz lattice. ’This may indicate that xenon is covalently bound [in quartz] with a local environment of xenon similar to that in xenon dioxide,’ says Schrobilgen.

Chrystele Sanloup of Pierre and Marie Curie University in Paris, a member of the group that first suggested the quartz solution to the missing-xenon problem, is enthusiastic about the new findings. ’Noble gas abundances are widely used by geochemists to assess the processes and timing of major terrestrial processes, including atmospheric formation,’ she says. ’However, their basic assumption is that noble gases remain inert at all conditions. The present findings throw the last rock at this assumption.’