Production of biofuels and esters - synthetic chemicals widely used for fragrances and fabrics - could potentially be greener, cheaper and more efficient thanks to researchers in the US who have shown how oxygen-coated gold nanoparticles can selectively oxidise a variety of alcohols and aldehydes.

Heterogeneous catalysis by gold has recently been the subject of renewed interest. In particular, scientists are keen to replace current technology for stoichiometric oxidation of alcohols with a catalytic process that could reduce energy consumption, increase selectivity and minimise production of environmental pollutants.

Now, Cynthia Friend’s lab at Harvard University, Massachusetts, US, has found that oxidative coupling reactions of aldehydes with alcohols using oxygen-coated gold nanoparticles are highly selective and can occur at low temperatures. Furthermore, the reactions occur entirely on the surface of the gold catalyst, in contrast to previous research on supported catalysts that triggered solution phase reactions.

’These principles apply to a wide range of alcohols and aldehydes, and thus to the synthesis of a wide range of esters,’ says Friend. ’These reactions can be accomplished cleanly with a high selectivity and at close to room temperature, which opens up the possibility of efficient and simple reactions to produce esters,’ she adds.

Esters are chemical compounds derived by reacting an oxoacid with a hydroxyl compound such as an alcohol or phenol. The team demonstrated that adsorbed atomic oxygen bound to the gold surface acts as a Br?nsted base, which causes the O-H bond in methanol to break. The resulting adsorbed methoxy intermediate then acts as a nucleophile to attack electron-deficient centres in a number of aldehydes to selectively form methyl esters. 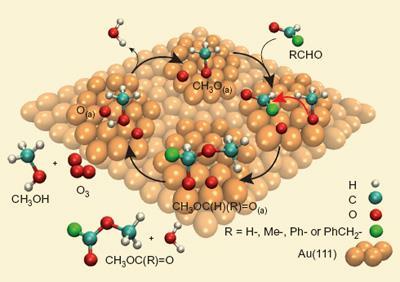 Schematic mechanism for coupling of methanol and aldehydes

’In a reacting system of this type, the two alcohols compete for reaction with the adsorbed active oxygen,’ explains Friend. ’The challenge will be to determine how to control which of four possible esters will be formed.’

Graham Hutchings, a catalyst expert at Cardiff University, UK, is enthusiastic about the work. ’This is an excellent model study on gold surfaces - really elegant experimental work,’ he says. ’Gold nanoparticles are well known to be active for alcohol oxidation and these model studies may help us understand some of the by-product formation, which will be really helpful.’

Friend suggests this work could offer environmentally friendly and more efficient alternatives to the production of low molecular weight esters. She also points out that understanding selective oxidation of alcohols in general is relevant to the processing of alternative fuel sources.

However, it remains to be seen whether the process can be scaled up. ’The major challenges for practical use are the efficiency of delivery of atomic oxygen to the gold, the cost of the gold in the catalyst, and the stability of gold-based catalysts under operating conditions,’ explains Friend. ’We are currently investigating vapour-phase esterification reactions over metallic nanoporous gold using O2 as the oxidant at atmospheric pressure with encouraging results,’ she says.

’This work shows that some reactions are possible under very low pressure and this is a very exciting possibility,’ comments Hutchings. ’This will also inspire us to look for these types of reactions under higher pressure conditions,’ he adds.