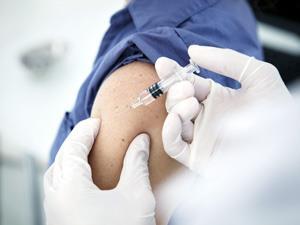 An experiment vaccine against Ebola has produced promising results in its first safety trial in humans. The researchers are now hoping to run Phase II/III trials in west Africa to test the vaccine’s effectiveness.

The candidate vaccine contains segments of Ebola genetic material from two strains of the virus – Sudan and Zaire – delivered by an adenovirus vector that causes the common cold in chimpanzees. Researchers from the National Institutes of Health in Maryland injected 20 healthy adults with the vaccine. The researchers found anti-Ebola antibodies in all 20 volunteers within four weeks of receiving the vaccine. Antibody levels were higher in the half of the group that received a larger vaccine dose.

‘We know from previous studies in non-human primates that CD8 T cells played a crucial role in protecting animals that had been vaccinated with this vaccine and then exposed to otherwise lethal amounts of Ebola virus,’ says Julie Ledgerwood, the trial’s principal investigator.

There were no serious adverse effects observed in any of the volunteers, although two people who received the higher dose vaccine did develop a brief fever within a day of vaccination.

The vaccine was developed collaboratively by scientists at the NIH’s National Institute of Allergy and Infectious Diseases (NIAID), and at Okairos, a biotechnology company acquired by GlaxoSmithKline (GSK).

Safety tests of a monovalent vaccine which targets only the Zaire species of Ebola, also developed by GSK and the NIAID, began in October at several sites, including Switzerland, the UK and Mali.

The results are very reassuring and the NIH team are to be congratulated on providing results so quickly, says Adrian Hill, director of the Jenner Institute at the University of Oxford, UK. The trial only started in September.

‘Data from trials being carried out in Africa will be key to see if the vaccine has a similar profile in populations most at risk from Ebola,’ comments Jonathan Ball, professor of molecular virology at the University of Nottingham. ‘We don’t know if the immunity seen in vaccinated people is protective, nor if the other vaccines in development will perform better. This is what Phase II trials will tell us and the design and roll-out of these will be the next key issue to resolve.’

A test for Ebola that takes just 15 minutes to deliver a result is to be trialled in Guinea. The standard technique used to test for the Ebola virus takes between two to six hours in a laboratory, according to World Health Organization estimates. Faster testing would help with infection control and early treatment.

Like other tests, the new version detects the genetic material of the virus. The pilot trial will test whether the reagents are safe and effective to use with Ebola patients’ blood and saliva samples. Significantly, researchers at the Pasteur Institute in Dakar, Senegal, will run the tests using a ‘mobile suitcase laboratory’, making it suitable for use in poorly resourced, remote hospitals. The reagents used in the test are available as dried pellets and can be used and transported at room temperature.

The trial is one of six projects jointly funded by the Wellcome Trust and the UK government.