The designer drug benzylpiperazine may damage the kidneys and liver, researchers have discovered

Scientists at Anglia Ruskin University haves shown that one of the most common ’legal high’ designer drugs, benzylpiperazine, is not only dangerous when it’s taken - repeated consumption poses major health risks. 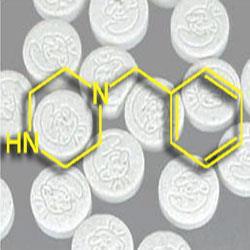 According to study leader Mike Cole, BZP users claim it has similar effects to ecstasy, but without some of the more unpleasant side-effects. ’It was reclassified as a controlled drug in the UK in December 2009,’ he says. ’Before this, it was made by people who did it for a living, and it was relatively pure. The legislation drove the synthesis underground, as it’s a fairly straightforward one-pot reaction, but once the drug is made it starts to react with the starting materials, and badly made BZP also contains other substances such as dibenzylpiperazine.’

Cole’s group, in conjunction with his colleague Lata Gautam, made a number of batches of BZP under different conditions to manipulate the proportions of the impurities. They then tested them against several human cell lines - fibroblasts, liver and kidney cells - both singly and as mixtures. They found that BZP is toxic to the kidney, while the precursor piperazine is toxic to the liver. The impurities are even more harmful and have synergistic effects with BZP itself. ’The damage you see is greater than the sum of the parts,’ he says. ’If people suspected to have taken these drugs end up in hospital, medics should do liver and kidney function tests, as it’s not always immediately apparent that damage has occurred,’ he says.

The research was presented at the annual meeting of the American Academy of Forensic Sciences.

According to Ric Treble, scientific advisor at LGC, the number of these ’legal high’ drugs is increasing rapidly. ’I believe 41 new compounds were identified last year,’ he says. ’They are often sold as "research chemicals" and there is very little information about their short or long term effects.

Rogue chemists study the chemical literature in search of the next big ’high’, Treble says, and make a lot of money out of them. ’They are mostly small chemicals that are relatively easy to make. The belief is they were initially being made in custom labs in China, where they have access to the chemicals and expertise to make them very quickly. The BZPs were, perhaps, the first examples of these, and governments are now rushing to try and control new ones as they appear.’

According to David Nichols, professor of pharmacology at Purdue University, people make and try new ones, and then post information about them on blogs.

’Benzylpiperazines are not that difficult to make, and you could make thousands of them with different substitutions,’ he says. ’I doubt we’ve yet touched the surface of what’s likely to be active, and what will appear on the market next. No doubt people are going to start making some of these to see if they can hit on one that’s really marketable.’

The next step for Cole’s group is to understand better how the cells deal with the drugs. ’We want to understand which metabolic processes are switched on and off to cause the damage, and how this can be used to help patients,’ he says. ’We also want to raise awareness of just how dangerous these drugs are.’