Einstein in your engine

Cars start thanks to Einstein’s principle of relativity. That’s the peculiar conclusion of new calculations by Rajeev Ahuja of Uppsala University in Sweden and his coworkers, who have looked at how relativistic effects on electron energies in lead atoms affect the voltage of the lead-acid battery, the standard electrical power source in cars. They find that these contribute around 80-85 per cent of the electrical potential of about 2.1V developed by such batteries.

Developed in the mid-19th century, the lead-acid cell is heavy and rather noxious, but because of its low cost and relatively high power it remains the most common battery for vehicles. During discharge, the lead cathode and lead oxide (PbO2) anode, immersed in sulfuric acid, are converted to lead sulfate.

In heavy atoms, the large positive charge of the massive nuclei can give the electrons such high energies that they move at a significant fraction of the speed of light. The theory of relativity then predicts that their mass increases, altering their distribution and the way inner electrons shield outer electrons from the nuclear charge. The result is a shift in electronic energy levels and corresponding chemical and physical behaviour. The yellow colour of gold and the low melting point of mercury are caused by relativistic effects, and it has been long known that they affect the properties of lead too. 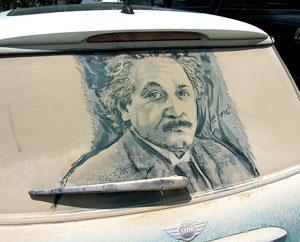 Think of Einstein every time you start the ignition

Ahuja and colleagues performed quantum-chemical calculations to determine how relativity alters the electronic band structures of lead oxide and sulfate. They find that all the s and p shells of lead (especially the 6s) are stabilised by relativistic effects, particularly in the oxide. They calculate the electromotive force of the lead-acid cell to be 2.13V, in close agreement with the experimental value. Without relativistic effects included, the voltage is 1.7-1.8V lower.

’I had been expecting this result for more than two decades, but there was no proof,’ says Ahuja’s coauthor Pekka Pyykk? of the University of Helsinki in Finland. He says the magnitude of the effect didn’t surprise him, as crude estimates implied that without relativistic corrections the potential (and the reaction) might even be reversed - as it is for the analogous case of tin, which can be considered ’non-relativistic lead’.

Russell Egdell, an inorganic chemist at the University of Oxford in the UK, concurs that significant relativistic stabilisation of 6s electrons in elements like mercury and lead is already recognised, but adds that ’the paper is the first to link relativity to the voltage of the lead acid battery.’ and that it emphasises the need to include relativistic terms in calculations of candidate battery systems involving heavy elements.