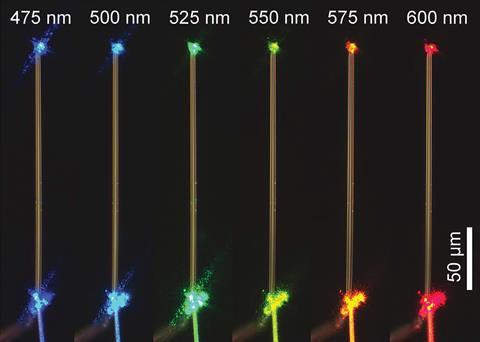 Ice is known as a hard, brittle material. But researchers in China and the US have now made flexible ice microfibres that can bend out of shape without cracking. When pressure is released, the fibres quickly return to their original shape. The material undergoes unusual phase transitions as it bends and can even transmit light as efficiently as efficiently as state-of-the-art on-chip waveguides.

The research team led by Xin Guo and Limin Tong from Zhejiang University made the ice crystals using an electric field-enhanced growth method. The fibres were grown at –50°C from the tip of a tungsten needle. By applying a voltage to the needle, the team accelerated diffusion of gaseous water molecules to the needle’s tip, growing fibres over 400μm long in just two seconds. The crystals had a hexagonal cross section and were generally a few micrometers wide, although some were just hundreds of nanometers across. 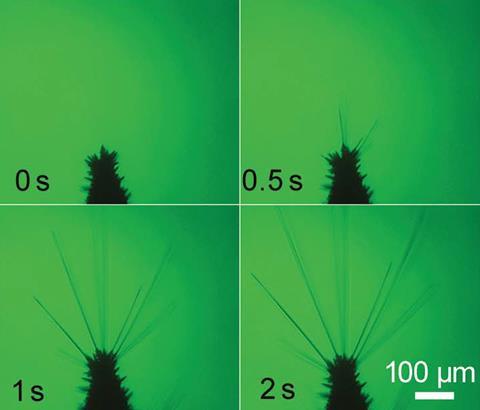 The team tested the crystal fibres’ mechanical properties under colder conditions, noting that the material could bend with a strain ‘approaching the theoretical elastic limit’. As the fibres bent, the team also observed an unusual, reversible phase transition as the material changed from a hexagonal crystal structure to a rhombohedral arrangement.

The material’s lack of crystal defects allows it to efficiently transmit visible light, opening up the possibility for its use as a flexible waveguide. The team concluded that the springy crystals offer a new avenue for ‘exploring ice physics and open previously unexplored opportunities for ice-related technology’.