Electrode dip to freshen up saltwater 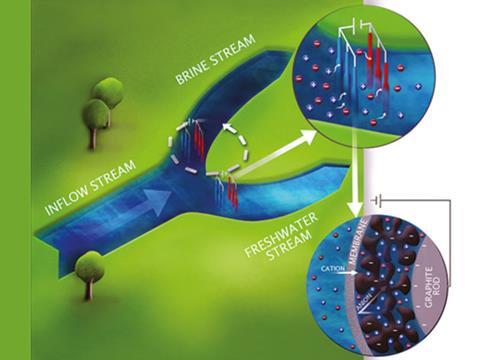 Producing freshwater from brackish water could be cheaper and easier than previously thought, according to researchers who have developed a new technique for desalination. The process, which is a refinement of a well-known method called capacitive deionisation, could treat large volumes of water in a continuous ‘merry-go-round’ of carbon electrodes.

Likun Pan, a physicist at the East China Normal University in Shanghai who was not involved with the research, calls the technique a ‘radical departure’ for capacitive deionisation, the working principle of which dates back to the 1960s. ‘This [study] will be followed up by many groups in the world, I am sure, as it is so simple to do it in this way,’ he says.

Obtaining sufficient freshwater is a growing problem: the United Nations predicts that by 2025 1.8 billion people will be living in regions of water scarcity, where demand for water exceeds supply. One way to satisfy this demand is to convert saltwater – from the sea, underground or elsewhere – into freshwater. The most popular methods of desalination are distillation, which involves boiling the water to seprate it from its salt or reverse osmosis, which traps the salt as the water is forced through a membrane. However, both these methods are energy intensive and reverse osmosis is particularly inefficient when the water is not very salty to begin with.

Such moderately salty brackish water is increasingly found in coastal aquifers, which are replenished by seawater the more they are tapped. As a result, scientists have recently been re-examining capacitive deionisation. In this method, brackish water is allowed to flow between two porous carbon electrodes. When an electric field is created across the electrodes, the positive salt ions in the water (such as sodium ions) are attracted by the negative electrode while the negative salt ions (such as chloride ions) are attracted to the positive electrode. Owing to the electrodes’ porosity, the ions are captured. Once desalination has taken place, a gate redirects flow, the electric field is switched off and the electrodes release the salt ions back into the incoming water. The obvious disadvantage of this technique is that it produces two output streams – a freshwater stream and an even more brackish byproduct.

Now, Maarten Biesheuvel, at Wageningen University in the Netherlands, and colleagues have found a way to perform capacitive deionisation without switching. In their experiments, they use two permanently separate batches of brackish water – one for desalination and one for waste – and transfer the carbon electrodes between them. The researches turn on a voltage of 1.2V in the desalination stream and turn it off in the waste stream, and found that in six cycles they could reduce the salinity of a 20mM batch of brackish water by a factor of 3 to 4. Although the researchers transferred the electrodes manually, they believe stacks of wires could go between large streams in a merry-go-round.

‘The system changes from a continuous flow, [which is] hard to control, to a batch system, which is easier to control and construct,’ says Fabio La Mantia, an electrochemist at the Ruhr University Bochum in Germany. He adds that the system should also be more efficient, as there will be fewer parts contributing to any ‘back-mixing’.

Biesheuvel points out that his group’s technique could run off solar panels, as there is no need for any of the high alternating-current supplies necessary for pumping water. ‘This research continues by scaling up the technology – testing larger arrays of wires – packing them more closely, [and] trying our hand [at] automation to have the rods lifted automatically from one water stream into another,’ he says.