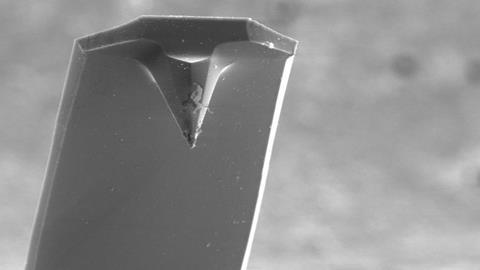 Electronegativity of a single atom scrutinised under the microscope

A method to measure the electronegativity of individual atoms on a surface could be used to study structural and reactivity variations in heterogeneous catalysts. 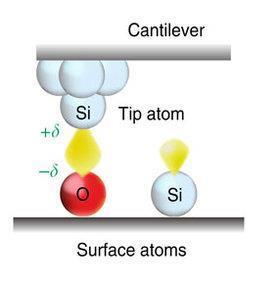 Today, scientists can measure bond energy from a single atom using atomic force microscopy (AFM). In this technique, a tiny cantilever beam bounces a tip, sharpened to an atomic point, near an atom on a surface. The microscope then draws the tip away from the surface to move the atoms within and beyond the length of a bond between them. Forces between the two atoms change as the distance between them grows, and these changing forces alter the vibrations travelling through the cantilever. By measuring the frequency shift of the cantilever vibrations, researchers can determine the bond energy between the tip and the surface.

Jo Onoda, at the University of Tokyo, and his colleagues wondered if AFM measurements of the bond energy between different atoms would reveal polarisation due to electronegativity differences. To test this idea, the researchers embedded oxygen atoms in a silicon surface and used AFM to measure the bond energy between an oxygen atom on the surface and a silicon atom on the point of the microscope tip. To account for natural variations from each tip, they repeated the measurement several times, using different tips each time.

Onoda thinks this technique could be used to study the surfaces of transition metal oxide catalysts, which are known to have a variety of active sites. Electronegativity measurements might help map reactivity across the surface, he says.

‘Electronegativity has never been an easy thing to measure with any technique,’ says Hannes Schniepp, at the College of William and Mary, US. He likes that this approach works well at the scale of individual atoms because principles that apply to collections of atoms do not always apply at the atomic level.