Electronic 'nose' could shed light on sense of smell

Korean researchers have combined human smell receptors with nanotechnology to create a new kind of ’bio-electronic nose’ that they hope will help improve understanding of the human sense of smell.

Tai Hyun Park and Jyongsik Jang from Seoul National University combined their research groups’ expertise in biotechnology and conducting polymer devices, mounting human olfactory receptor (hOR) proteins on conducting polymer nanotubes. They then attached these nanotubes to a microelectrode array to create a field-effect transistor, which then allows changes in the electrical signal that occur when odour molecules bind to the receptor proteins to be detected. 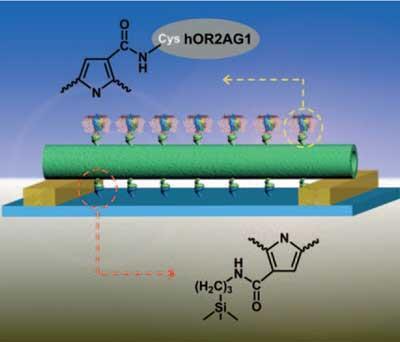 Park says the system can detect smells very well. ’The proteins have amine groups on the surface and the conducting polymers are functionalised with carboxylic acids, so we can covalently link the protein to the nanotube with a peptide bond,’ he explains. ’This covalent attachment means that when the target molecule binds to the receptor, the signal is very effectively transferred to the nanotube.’

The receptor used in this device is known to be particularly good at binding amyl butyrate, an ester with an aroma of pineapple or apricot that is used as a food additive. The team found that they could easily detect extremely low (femtomolar) concentrations of amyl butyrate, but that related esters (butyl- and hexyl butyrates) that differ from the target compound by a single carbon atom each, produced no response at concentrations 10 billion times higher.

’The sensitivity and selectivity of the device is very good,’ Park comments, ’which indicates that the protein is still functioning correctly and is not badly affected by being attached to the nanotube. We don’t yet know what affect the binding has on the conformation of the protein, but we can see that it still works!’

While the device has obvious applications in detecting specific molecules, Park explains that they want to use it to better understand how the human sense of smell works: ’Around 370 to 380 different olfactory receptors exist, but many of them are not selective for single compounds and we don’t know what the targets of some of them are. We want to clone lots of different receptors and put them in devices like this, and then make devices with combinations of different receptors on, to try and detect more complex odours and understand how we distinguish them.’

Jasmina Vidic, from the National Institute of Agricultural Research in Jouy-en-Josas, France, works on bio-electronic nose devices involving receptor proteins maintained within cell-membrane-like lipid bilayers. ’This is the first time I have seen conducting polymers used to immobilise [olfactory] receptors,’ comments Vidic, ’and because they are covalently attached by amide bonds they are very stable. The fact that they can selectively detect the target ligand means that the receptors are probably still in good shape [after being attached to the device], which is very promising.’