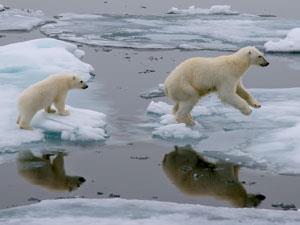 The message for governments is the same, but the language of the latest assessment from the International Panel on Climate Change (IPCC) is stronger and starker than ever before. Now the IPPC says that carbon emissions will have to fall to zero by 2100, but that the means to achieve this are economically affordable.

Climate change and its effects are unequivocal, said Rajendra Pachauri, chair of the IPCC at a press conference where the latest Synthesis Report was unveiled. ‘Every time the IPCC reports, we are more precise and our confidence level is stronger.’ The 2007 version of this report concluded that it was ‘very likely’ (90% probability) that humans were the dominant cause of recent climate change, but now scientific certainty has increased to 95%.

The report issues a bleak warning that without urgent action to slash greenhouse gas emissions, warming by the end of the 21st century will lead to ‘high to very high risk of severe, widespread and irreversible impacts globally’. Compared with 2007, this report includes stronger evidence on the effects of climate change such as more frequent and intense extreme weather events.

To limit global warming to 2°C above preindustrial levels by 2100, emissions must be cut by 40–70% by 2050, and to below zero by 2100. ‘The economic cost of inaction will be horrendously high, higher than action,’ Pachauri warned. ‘There are options available today that are economically viable, including energy efficiency measures, renewables and carbon capture and storage (CCS). Without CCS, then power generation from fossil fuels would have to be phased out by 2100.’ However, so far, there is still only one commercial-scale power plant equipped with CCS technology.

‘What is important is that the governments approved this message,’ said Piers Forster, professor of physical climate change at Leeds University, UK, and report author. ‘They wanted strong words to help push the negotiations [of the UN Framework Convention on Climate Change members] in Paris next December.’ The meeting in Paris in 2015 marks the deadline for a global agreement for a successor to the Kyoto Protocol.

Having been initially pessimistic that a deal could be struck in Paris, Forster has been ‘incredibly encouraged’ at discussions leading up to the latest IPCC report. ‘Countries came together to reinforce the science rather than water it down. The EU – with the UK very much acting as leader – led the way in pushing for strong statements. It was the position of China, though, that was most encouraging. They also came out strongly in favour of letting the science speak for itself.’ With the EU and China leading the way on climate, Forster says that opposition to a deal is crumbling. He adds that if the two continue to work together in Paris ‘we’ll get our climate deal’.

With an eye on the haggling expected in Paris, EU leaders agreed in October to reduce greenhouse gas emissions by at least 40% by 2030 compared to 1990 levels. The target is binding at a national level.

The bloc also agreed to boost the use of renewable energy to 27% in the total EU energy mix, but it will not be binding at national level. A ‘flexibility clause’ will make it possible for European leaders to reconsider all three targets at any time should, for instance, the world not introduce a new binding agreement to cut emissions.

The EU’s climate commissioner, Connie Hedegaard, said the EU has ‘sent a strong signal’ to the world. Forster agrees that this deal is vitally important as it gives the EU leadership credibility in climate negotiations.

But others are not so sure. The 40% figure was the minimum deemed acceptable, says Antony Froggatt, senior research fellow at thinktank Chatham House. ‘It won’t necessarily lead others to make stronger commitments. It was as good as could have been expected given EU politics and issues surrounding energy security and competitiveness.’

However, Markus Beyrer, director general of the business federation BusinessEurope worries that industries may leave Europe and head to other major economies with less stringent climate targets. He wants a ‘greater consideration of competitiveness’ and says the 40% target is highly ambitious. Environmental groups are not satisfied by the new targets, though. The European Environment Bureau (EEB) condemned the targets as ‘desperately ineffective’. Jeremy Wates, EEB secretary general, points out cutting emissions by 60% is what the science of climate change demands.