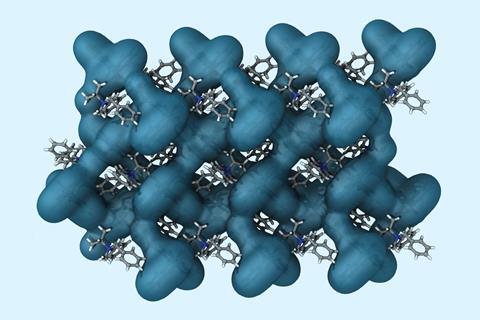 Researchers from Durham University, UK, have discovered a simple way to make chiral nitrogen structures as single mirror image molecules. This first enantioselective synthesis of ammonium cations makes such stable nitrogen stereocentres easily accessible – something that so far had been only possible using certain natural compounds.

Nitrogen, like carbon, phosphorus and other elements, forms chiral structures. However, controlling that chirality is challenging. Nitrogen is conformationally unstable, its lone electron pair triggering rapid interconversion between enantiomers – a mechanism known as umbrella inversion.

But in tetravalent ammonium cations this effect disappears, locking the nitrogen stereocentre’s configuration. Although enantioenriched ammonium cations were first isolated in 1899, ‘we didn’t have direct synthetic methods to access these compounds’ explains lead researcher Matthew Kitching. ‘Previous attempts were mostly based in chiral separation of enantiomers.’

‘Our discovery was mostly serendipitous,’ says team member Mark Walsh. ‘We were exploring methods to separate ammonium salts using molecular recognition and stumbled upon conditions that led to pure enantiomers.’

The secret is mastering equilibria. The reaction flask holds a mixture that allows racemisation, interconversion between the enantiomers. It also contains the chiral compound Binol, which selectively recognises one of the isomers, forming a supramolecular complex. This enantiomerically pure ammonium salt crystallises. To obtain the mirror image, the researchers just swap Binol’s chirality.

‘The abstraction to the solid phase is key in driving the reaction forward’ says Kitching. ‘It’s different from a classical dynamic kinetic resolution, as thermodynamics also play a role.’

By combining amines’ tendency to racemise with chiral recognition, the team can selectively make either ammonium cation enantiomer

‘This [study] very nicely develops a very practical method for the synthesis of highly enantioenriched ammonium salts,’ says organic chemist Robert Phipps from the University of Cambridge, UK. ‘It’s elegant and simple, […] interested researchers will likely give it a go.’

Phipps explains how access to chiral ammonium salts is currently limited to ‘a couple of privileged classes’ like cinchona alkaloids. Thanks to this method, other enantiopure ammonium cations will become readily available, opening possibilities in catalysis.

Besides, this approach could find uses in drug development. Different commercial drugs like the asthma medication ipratropium bromide and the painkiller hyoscine butylbromide feature chiral ammonium centres. ‘Access to enantiopure ammonium salts will help us better understand the effects of these chiral compounds in our body,’ explains Walsh.

Although the process still has limitations – only a few ammonium structures are accessible – the potential is promising, according to Phipps. ‘A few trivial changes to the Binol structure could broaden the scope.’

Beyond exploring other structures for chiral recognition, Kitching’s team is looking into the molecular mechanisms behind this process, which could provide hints for more efficient designs. ‘So far, we’ve discovered hydrogen bonds play a very important role, but we need to investigate further,’ says Kitching.

As the synthesis is easily scalable, using few reagents and a simple filtration to isolate the reaction products, the team has started collaborations with Johnson Matthey to find applications for their chiral ammonium salts.