A scientist from the US has put forward a new approach to encode a molecule with 13C. He says the technique can mirror the complexity of Rivest-Shamir-Adelman (RSA) encryption – an algorithm that encrypts credit card details during online transactions. 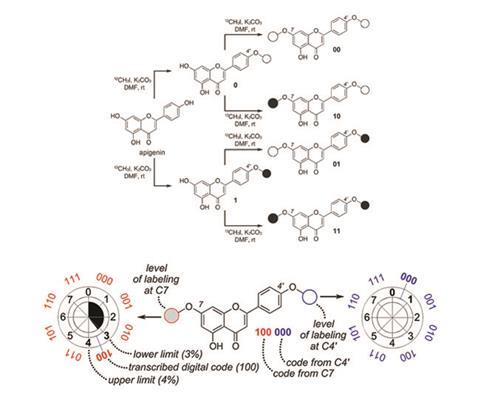 Top: A two-step methylation procedure can be used to prepare four different isotopically labeled 4′,7-dimethylapigenins 00, 10, 01 and 11. Bottom: Digital codes can be ascribed to a molecule using an enigma-like translation table at each labeled position

James La Clair, from the Xenobe Research Institute, demonstrated his encryption method by hiding a digital code within the natural product apigenin then applying it to a paper document. He created a molecular two-digit system by methylating the C-4’ position in apigenin using either 12C or 13C and then methylating the C-7 position with either 12C or 13C. The complexity of the encryption can be increased further by mixing the four isotopically labelled 4’,7-dimethylapigenins in different amounts. Each mixture will have a different digital code. The code can be deciphered by analysing the ratios of the characteristic NMR peaks caused by the different 4′,7-dimethylapigenins.

La Clair suggests that the technique could serve as an anti-counterfeiting tool.