A better solution for the environment

The health, safety and environmental spotlight is now falling squarely on many of the solvents chemists take for granted. A number of widely used ones are now facing restrictions, if not outright bans, because of toxicity and environmental concerns. What is being done to make solvents safer and more sustainable? 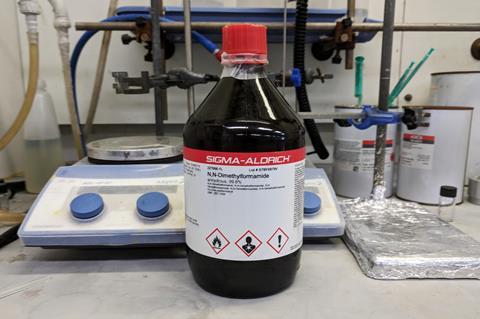 Solvents like dimethylformamide, N-methylpyrrolidone and dimethylacetamide are likely to be restricted under the EU’s Reach regulations

‘Industry has been chasing greener solvents for at least 20 years, but Reach [the EU regulations on registration, evaluation, authorisation and restriction of chemicals] is really forcing their hands,’ says James Clark, director of the Green Chemistry Centre at the University of York, UK. ‘The list [of available solvents] is going to get much shorter.’ Registration under Reach is ongoing, and it’s still unclear how many solvents will be affected. Finding greener alternatives has gone from being desirable to essential.

Rather than talking about green solvents, Tom Welton, professor of sustainable chemistry at Imperial College, prefers to talk about solvents that facilitate sustainable chemical processing. ‘There’s a balance between what happens when a solvent hits the environment, and how good it is at doing what you are trying to do with it,’ he says. ‘You might find a solvent that is actually slightly worse environmentally than the “greenest” one available, but is much better at facilitating the process. You have to look at the whole lifecycle when making decisions.’

Industry has been chasing greener solvents for at least 20 years, but Reach is really forcing their hands. The list of available solvents is going to get much shorter

Solvent users across the board in industry – from chemical processors to cleaning companies to those who include solvents in their formulations – will have to face up to the changing regulations. ‘They all want greener versions of what they are currently using,’ Clark says. ‘The need is now very strong. The way Reach works, companies will be given a limited time to work with the old solvents, but soon they are going to have to find alternatives. This should encourage people to think now about green replacements.’

Continued use of many polar aprotic solvents, and amides in particular, is likely to be restricted under Reach, because of concerns about their reproductive toxicity. ‘NMP [N-methyl-2-pyrrolidone], DMF [dimethylformamide] and DMAc [dimethylacetamide] have been workhorses of industry for a long time, but their days are numbered, except maybe for some very specialist applications,’ Clark says.

There have been concerns about halogenated solvents for some time, too, and pressure is now building now on various common hydrocarbon solvents, such as hexane and toluene. ‘Although the restrictions so far are not that harsh, they are likely to get worse, and a lot of companies are now thinking about what they can use instead,’ he says.

Some oxygenated solvents are coming out badly in assessments: even if they are biodegradable they are failing on toxicity tests. Acetone is also under discussion, despite its presence in multiple consumer goods, as it can be used to make explosive peroxides. ‘I can see it being very heavily restricted in the future,’ Clark claims.

He has even heard companies saying that the only solvents they now want to use are water, ethanol and carbon dioxide. ‘But that’s just not enough. We are currently using more than 100 different solvents in industry,’ he says. ‘We have such an enormous range of properties we can call on now, and industry wants the same range of properties from a future set of greener solvents. Personally, I don’t think that looks like that’s going to happen, at least not in the near future. I think there’s going to have to be a rethink.’

Clark believes a green solvent toolkit is needed, offering acceptable solvents with a wide range of properties that cover most application demands. ‘On the positive side, I don’t see why we need to be constrained by “as good as”,’ he says. ‘Why not be ambitious and aim for something that’s even better than what you’ve been using in the past – not just safer, but better performance too?’

If we can’t use halogens, nitrogen or sulfur, the toolkit is getting smaller, so a combination of clever thinking and serendipity is needed

Gaps remain in the green solvent map. While there are plenty of esters and alcohols in the middle, replacements may not be available when water miscibility or extremes of polarity are required. ‘We made synthetic substances to get those unusual, unnatural properties, and now we’re looking for natural alternatives, they are almost by definition hard to find,’ Clark says. ‘If we can’t use halogens, nitrogen or sulfur, the toolkit is getting smaller, so a combination of clever thinking and serendipity is needed.’

Mixtures might, in some cases, fill those gaps. Organic chemists are familiar with solvent mixtures from running chromatography columns; what about using them in industrial processes? ‘It may be a viable possibility in some cases,’ Clark says. ‘It might make it a bit more awkward when it comes to workup, for example, but maybe we need to think differently.’

The hunt for alternatives

Some solvents can be made ‘greener’ by manufacturing them from renewable sources rather than petroleum. Bioethanol is made in huge quantities for the fuel market, but it can also be a raw material to make other solvents. For example, last year, US firm Prairie Catalytic opened an industrial-scale facility to produce bio-based ethyl acetate in Columbus, Nebraska, using corn-derived bioethanol from the neighbouring Archer Daniels Midland wet mill corn processing facility.

But for those solvents that are now being deemed fundamentally unacceptable, replacements will be required, and some of the alternatives aren’t all that green. ‘They might just about get around the legislation at the moment, but probably won’t for long,’ Clark says.

One potential alternative to NMP and its counterparts has been developed by Australian company Circa, which was set up a decade ago to find new revenue streams from wood waste. The chemical building block levoglucosenone can be made from sawdust in one step, and Clark suggested that hydrogenating it might give solvent properties. Dihydrolevoglucosenone is now available as a solvent under the name Cyrene.

A 50 tonne/year plant in Tasmania was commissioned earlier this year, with plans for another with a capacity of at least 1000 tonnes/year. It is being sold in research quantities through Sigma Aldrich, and on a larger scale by Dutch speciality chemicals distributor Will & Co.

‘In tests, its properties are very similar to those of NMP, DMF and DMAc,’ says Circa’s business development manager Fabien Deswarte. ‘There is no such thing as a drop-in replacement solvent. In some applications it doesn’t work at all, but in a growing number of applications, it performs well or outperforms existing solvents.’ It is showing particular promise in polymer processing, where at-risk solvents such as NMP are heavily used. 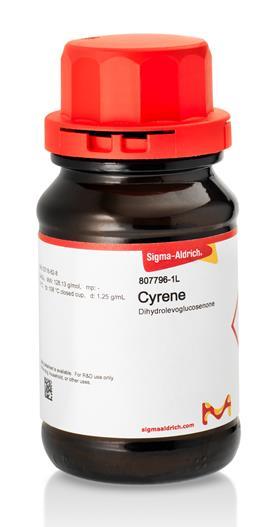 The York team is developing TMO (2,2,5,5-tetramethyloxolane) as a replacement for hydrocarbon solvents, under the European ReSolve renewable solvents project. ‘Toxicity tests all look promising,’ Clark says. ‘There are more biodegradable, safe, interesting solvents to be created.’

Ionic liquids are another potential replacement for the most concerning solvents. NMP is used in the process that turns cellulose from wood pulp into the textile fibre Lyocell, and the challenge is finding something else that dissolves the cellulose without decomposing it, Imperial’s Welton says.

‘There are ionic liquids that dissolve the cellulose very effectively to give a solution with the viscosity you need to extrude cellulose fibres,’ he says. ‘None of these things are simple and there is still a lot of work to be done, perhaps with the use of co-solvents, but it is looking promising that we will have an ionic liquid-based process that could compete with the Lyocell process.’ It might also replace the viscose process, which generates a lot of waste.

On the environmental front, the carbon footprint of solvents would be reduced if they were routinely recycled. Numerous companies are active in the market already, including Tradebe, which has two chemical purification facilities in the UK, one in Spain and two more set to open in the coming year or so, in Italy and Germany. All are based on distillation.

‘We purify a wide range of molecules by simple, fractional or azeotropic distillation, and we also have glass-lined plant to purify organic acids,’ says Andrew Crowther, Tradebe UK’s safety, health, environment and quality director. ‘We match the most efficient distillation process to each input, evaporating molecules out of a mixture and then condensing them back. It’s the same molecule – it’s chemically unchanged.’ 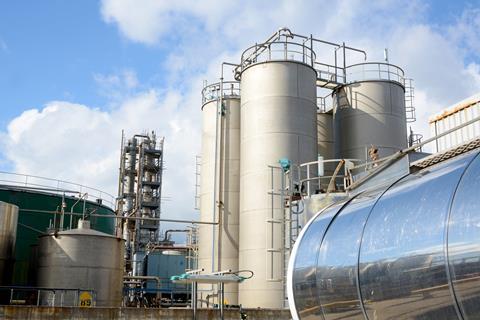 It is often a closed recycling loop, with the chemical being returned to the original customer for reuse. ‘We are a raw material supplier who also takes waste away,’ Crowther says. ‘It is returned in equivalent quality to the new raw materials. These are molecules that would otherwise have been destroyed in a high-temperature incinerator, with (at best) energy recovery.’

The carbon savings compared to virgin solvents can be substantial, Crowther says. ‘Making a tonne of acetone, for example, generates about 2000kg of CO2, while recycling a tonne generates about 400kg,’ he says. ‘With [tetrahydrofuran], the difference is much greater.’ These figures are conservative – they exclude what would otherwise happen to the material, such as incineration, and ignore the fact that it can be recycled multiple times. ‘It’s a good example of a circular economy approach in action. Significant, quantifiable environmental benefits are already being realised.’

The choice whether to recycle or not often boils down to economic viability, however. ‘How much it is going to cost, and how difficult it is going to be?’ says Ted Zajack, director of reclaim operations at Veolia North America, which operates five solvent recycling facilities in the US. ‘For some solvents, recycling is very expensive. Here in the US market, some of our customers will recycle anything; we can either return it to them, or sell it to a third party.’

Some companies would rather be more sustainable even if it costs more, while others pay more attention to their bottom line than sustainability, adds his colleague Jim Reddy. Expensive solvents are more likely to be recovered, he says, even if there is a poor yield or other difficulties. ‘On the flip side, virgin methanol is very inexpensive, so it would cost more to recover it than get rid of it and replace it with virgin,’ he says. ‘It comes down to company preference.’

The cyclical nature of the chemicals market also has an impact. ‘When the solvent market is up, more companies look at recycling their solvents,’ Reddy says. ‘When virgin solvent prices dip down with the market, recycling becomes less attractive.’ He has noticed an uptick in industrial solvent recycling in the past couple of years, but this may be a reflection of a rise in manufacturing in the US. A substantial increase, however, is likely to require a regulatory push.

Challenges remain, but advances are being made. ‘We are increasingly able to find distillation solutions for much more complex mixtures of materials that, in the past, would have gone for incineration,’ Crowther says. ‘We are now able to quantify the carbon benefit of recycling, and interest is growing from industry because of its sustainability benefits.’