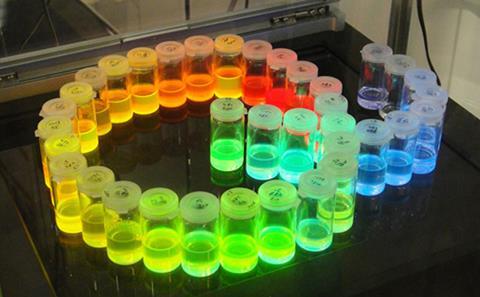 Scientists in Germany have created an indium-based quantum dot as an environmentally-friendly alternative to the toxic cadmium nanocrystals currently used in commercial liquid crystal displays (LCD). The research follows an EU announcement in May 2015 that cadmium may be banned from all consumer products by 2017.

Quantum dots are atom-scale fluorescent nanoparticles that can emit different colours based solely on their size. This feature offers exceptionable flexibility when it comes to tuning them and a colour range that is inaccessible in a standard LCD screen. Although electronics manufacturers, such as Samsung and LG, have been quick to adopt the technology in television displays, their widespread use has been questioned due to their reliance on cadmium.

A team led by Armin Wedel at the Fraunhofer Institute for Applied Polymer Research has now designed an indium phosphide quantum dot that is completely free of cadmium. The material offers a similar level of colour performance to their toxic predecessor, according to the researchers. Wedel said in a statement: ‘We see this as a good first milestone, but we are still striving for further improvement.’