EPA probes its own dismissal of expert scientist

The US Environmental Protection Agency (EPA) has launched an internal enquiry on its decision to remove toxicologist Deborah Rice from an internal review panel last summer, amid a congressional enquiry on the issue. 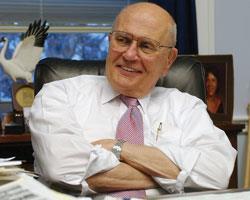 John Dingell chairs the US House Energy and Commerce Committee

The House of Representatives Energy and Commerce Committee is investigating the situation, after learning that the American Chemistry Council (ACC) - a major chemical industry association - urged the agency to dismiss Rice on the grounds of bias (see Chemistry World, April 2008, p15).

The EPA panel was charged with examining reference doses for fire retardants known as polybrominated diphenyl ethers, or PBDEs, that may pose a public health risk.

Rice, a former EPA scientist now with the Maine Center for Disease Control and Prevention, was accused of bias because she made public statements against deca-BDE, which was one of the four forms of PBDEs the panel examined. Rice made the remarks in February 2007 when she testified as an expert witness for the Maine state legislature.

EPA now wants its inspector general to determine whether Rice’s dismissal was ’consistent with existing federal law and regulations’, and whether the current rules governing EPA’s scientific peer review panels are ’adequate to protect objective scientific reviews’. The agency also asks for recommendations on improving the system for recruiting and managing its expert panels, but sets no timeframe for a report.

EPA’s request for assistance comes several weeks after its 27 March deadline to provide the House committee with extensive documentation on the Rice incident.

Among the records sought by the committee’s chairman John Dingell, and Bart Stupak who chairs its oversight and investigations subcommittee, are all communications between EPA and others involving Rice, as well as all instances in which EPA has removed, or has considered removing, panel members for conflict of interest, lack of impartiality, or the appearance of lack of impartiality.

Congressmen Dingell and Stupak have also turned the spotlight on ACC, requesting that it hand over copious paperwork detailing how the organisation determined that Rice had a conflict of interest that warranted her removal from the panel. They are also interested in ’all records of payments and communications’ between ACC and William Carroll, a former president
of the American Chemical Society who also served as a spokesman for the Vinyl Institute - an industry trade group representing manufacturers.

The EPA is currently compiling its documents for the congressmen, and ACC has begun handing over many of the requested papers.

’Our investigation is ongoing, and as we receive the documents we will review them,’ a committee spokesman told Chemistry World. ’Our action depends on what the answers are and what we find.’